High notes for a Spring Equinox 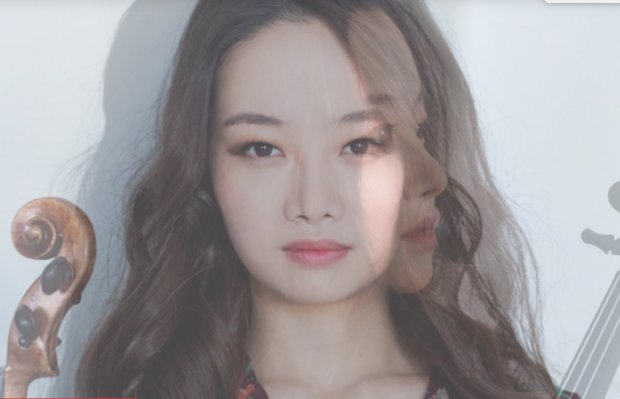 The Tekfen Philharmonic Orchestra gave a concert at the Lütfi Kırdar Concert Hall in Istanbul on March 21, 2019 – the day after the Spring Equinox, which happened to coincide with a full moon. The huge open space outside the concert hall, an observation platform set above the valley leading down to the Dolmabahçe Palace, was an excellent place from which to gaze at the moonlight on the Bosphorus at the point where it opens out into the Sea of Marmara.

Inside the hall, it was gratifying to see a nearly full house. The auditorium was not quite full enough to be described as çok kalabalık (the Turkish phrase meaning ‘very crowded’ that eventually became the English word ‘chocabloc’ thanks to returning expatriates from the British community in İzmir, whose use of çok kalabalık in their conversations was picked up and imitated by their friends), but it was something respectably near it. The Tekfen Orchestra is playing every bit as well these days as it was when I first listened to it ten years ago, and is to be the orchestra for the opening concerts of the İKSV Istanbul Music Festivals in 2019-22.

The first item on the programme was the last movement (entitled Bar ve Son Oyun) from Ferit Tüzün’s Çeşmebaşı (‘By the Fountain’) suite – music for what is generally regarded as the first Turkish ballet, which was choreographed by Dame Ninette de Valois. Just in case you were wondering, ‘Bar’ is the name of a folk dance from the Elazığ region; ‘Son Oyun’ means ‘last dance’. 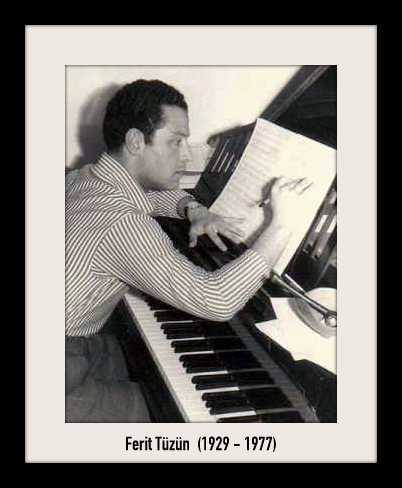 Ferit Tüzün (1929–1977) was one of the best Turkish composers ever to venture into the field of Western classical music. His musical career began at the Ankara State Conservatory, where he received lessons in piano from Ulvi Cemal Erkin, and in harmony and composition from Necil Kazım Akses. In 1954 he was awarded a scholarship by the Turkish Ministry of Education to go to the Hochschule für Musik und Theater in Munich, where he studied conducting with Fritz Lehmann, Gotthold Lessing and Adolf Mennerich. Returning to Turkey in 1959, he conducted the Ankara State Opera, later becoming general director of the State Opera and Ballet. His untimely death at the age of 48 took place while he was still occupying this post.

Tüzün began composing at the Ankara State Conservatory and continued to do so in Germany, where he received the support and encouragement of Carl Orff and Karl Amadeus Hartmann. One of his first works was the Anadolu Süiti (‘Anatolia Suite’, 1953–54). This was followed in either 1956 or 1957 (sources disagree on the date) by the Türk Kapriçyosu (‘Turkish Capriccio’), given its first performance by the Munich Philharmonic, and the Humoresque, later renamed Nasreddin Hodja. The works for which he is best known were all written in the 1960s. These were the Çeşmebaşı Bale Süiti (‘By the Fountain’ Ballet Suite, 1964, an expanded version of the earlier Anadolu Süiti), Esintiler (‘Inspirations’, 1965) and the opera Midas’ın Kulakları (‘Midas’s Ears’, 1966-1969). I have given the names of all these works because they genuinely are worth listening to. It was then, and still is (I am very much afraid), a rare event for a Turkish composer of Western classical music to master the art of orchestration, but Ferit Tüzün’s time in Germany seems to have enabled him to do just that. He did indeed make use of the rhythms of Turkish folk music (and who wouldn’t take advantage of such a magnificent resource?), but did not by any means restrict himself to its melodies, and for the most part composed his own tunes. I will add that the level of sophistication in his compositions is well above that achieved by the vast majority of his fellow-countrymen, and say no more.

The Çeşmebaşı ballet suite in fact consists of five movements. Here is a recording of the full work by the Bilkent International Youth Orchestra conducted by Gürer Aykal.

Now, here is Ferit Tüzün’s Esintiler (‘Inspirations’) played by the Bilkent Symphony Orchestra under the baton of Gürer Aykal. The first of the two videos has the first movement (Allegro), while the second has the second and third movements (Zeybek and Allegro Vivace).

The last of Ferit Tüzün’s works that I wish to bring to your attention is the ‘Anatolian Candle Dance’ (Çayda Çıra), heard here in a performance by the Moscow Radio and TV Symphony Orchestra conducted by Hikmet Şimşek. I have been unable to find out exactly when the piece was composed, but judging from the level of maturity I surmise that it was one of his later works.

The second item on the programme on March 21 was Max Bruch’s Violin Concerto No 1 in G minor, in which the Tekfen Philharmonic accompanied the South Korean violinist Bomsori Kim. Max Bruch (1838-1920), a native of Cologne, was most famous in his lifetime as a composer and conductor of works for choir and orchestra, but it is his first violin concerto that has best stood the test of time. Indeed, its lyrical melodies (especially in the slow movement) have earned it such a high degree of popularity that its place in the violin repertoire seems permanently assured.

Bruch began writing the concerto in the summer of 1864, when he was 26. Nearly 18 months later, he wrote to Ferdinand Hiller, his former teacher, as follows: ‘My violin concerto is progressing slowly – I do not feel sure of my feet on this terrain. Do you think that it is very audacious to write a violin concerto?’ This lack of confidence plagued him for the remainder of the three and a half years it took him to complete it – which he eventually did at the end of 1867, after a large number of revisions. The work was first performed in Bremen by the virtuoso Joseph Joachim (to whom it was dedicated, and who was responsible for many of the revisions) in January 1868, and swiftly became so popular that it overshadowed all Bruch’s other compositions – to the extent that he could not bear to hear it.

When the work was performed in Liverpool, its success was so overwhelming that Bruch was invited to conduct the Liverpool Philharmonic Orchestra, which he did from 1880 to 1883. However, the members of the orchestra are said to have disliked him. The man with the little oval spectacles turned out to be quite a martinet, and they were glad to see the back of him when he returned to Germany.

The concerto has three movements: Vorspiel, Allegro moderato; Adagio; and Finale. Allegro energico – Stringendo poco a poco (‘Stringendo poco a poco’ means ‘getting faster little by little’, by the way). It is a rare event for me to be able to find a YouTube video of a work I am describing played by the person whose performance I heard, but on this occasion the equinoctial full moon seems to have shone favourably on me. Here is Bomsori Kim playing the Bruch concerto with the Korean Symphony Orchestra:

Ms Kim’s performance at the Lütfi Kırdar Concert Hall was a memorable one, and the orchestra accompanied her with consummate skill. The soloist’s slim figure did not prevent her from pulling out all the stops and ramping up the drama when required, and I was overwhelmed with admiration for her tone in the high register. This was no doubt thanks in part to the superb instrument she was playing, which apparently was manufactured by Joannes Baptista Guadagnini in 1774.

My favourite video of her is the one in which she is playing Shostakovich’s Violin Concerto No 1 in A major. I think she has caught the moody, obsessive quality of this work with great success, especially in the darker-than-dark – and horrendously difficult – cadenza that starts at 28:31 after the pizzicato accompaniment has died away (click on to 26:44 for this).

Bomsori Kim’s accompanist in the following video of an arrangement of Chopin’s Nocturne No 20 in C sharp minor is the Polish pianist Rafal Blechacz – and what a lovely tone she produces in those high C sharps!

For her encore, she gave us a little Paganini. This was enthusiastically received, as were her comments on the special relationship between her country and Turkey that owes its origins to Turkish participation in the Korean War.

The second half of the programme was devoted to Prokofiev’s Fifth Symphony, written in 1944. My description of this work appeared in a blog on a concert in September 2018, at which it was performed by Cem Mansur’s Turkish National Youth Philharmonic Orchestra. Here is a link.

It was the rousing and dramatic first movement, intended to raise morale for the Russian war effort, that most impressed the audience for this work’s first public hearing in January 1945, and indeed the audience at the Lütfi Kırdar broke into applause after this movement at the concert on March 21. In any case, things had begun remarkably well. The opening bars, establishing the serious mood, had been perfectly played by the woodwind and brass. As may be expected from an orchestra of Tekfen’s quality, the performance was a highly enjoyable one. On this occasion, I will single out the brass section for special praise. (This is not to say, of course, that the other sections did not play well.) The conductor, Aziz Shokhakimov, caught my attention with his vigorous body movements – quite jerky on occasions – and the expressive gestures he makes with his left hand. Even after having seen them quite a few times now, I am still unable to fathom their meaning, but whatever he is trying to communicate to the orchestra certainly seems to come across very effectively.

Once outside the concert hall, my companions and I were shivering too much to want to revisit the observation platform and indulge in more moon-gazing. With the sun conjunct Chiron, the asteroid known as the ‘wounded healer’, it was no time to invite trouble in the form of health issues. And so I will end with an Evil-Eye-averting Maşallah for the Tekfen Philharmonic Orchestra, which I look forward to seeing in action once more during the İKSV Istanbul Music Festival in June.