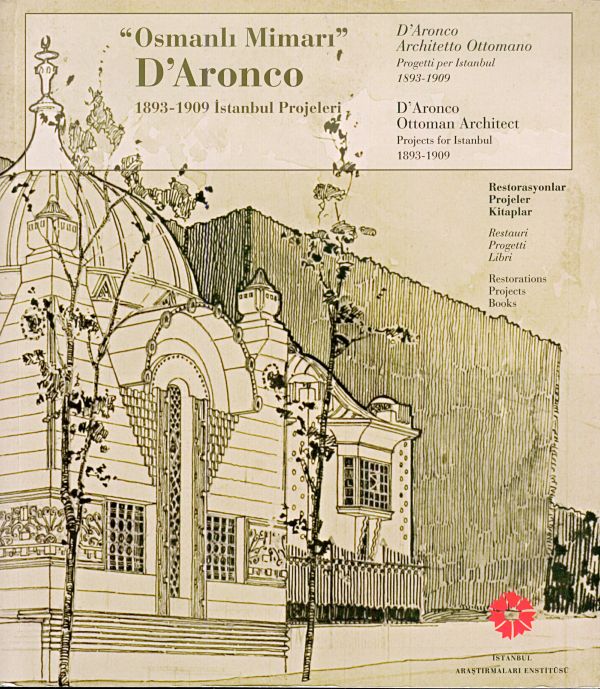 The book of the exhibition bringing together original drawings, charcoals and watercolours by and a selection of works from the library of Raimondo D’Aronco, an important Italian architect who put his stamp on early 20th century Istanbul and indeed on a whole period of late Ottoman architecture.


Raimondo D’Aronco’s career as an architect in Istanbul almost ended before it had properly begun. Born in Friuli in northeastern Italy in 1857, D’Aronco was invited to the city in 1893 to design the venue of a great exhibition that would celebrate the 20th anniversary of Abdülhamid II’s accession to the throne three years later. Unfortunately, the great earthquake of July 1894 meant that the exhibition was cancelled, and D’Aronco’s designs remained on paper. However, the huge damage that this catastrophe caused to Istanbul’s monumental heritage ended up binding his name inextricably with the city.

The Italian innovator was given the task of restoring all kinds of structures, including mosques, fountains, government buildings, the Grand Bazaar and parts of Ayasofya. The experience gave him an understanding of the city’s complex architectural history that was arguably unrivalled among the foreign architects of the period.

D’Aronco went on to design and construct many new buildings in Istanbul, from commercial premises to private houses and government offices. He worked with various Ottoman ministries and became chief palace architect to Abdülhamid II, helping to realise the Sultan’s concept of a modern Ottoman identity for the city. While other architects of an Italian background, such as Gaspare Fossati and Pietro Montani, had been employed on important imperial works by the previous sultans, Abdülmecid and Abdülaziz, D’Aronco was the first foreigner to occupy the post of palace architect.

In this role he initially worked alongside Sarkis Balyan, a member of the family of Armenian builders who had built Dolmabahçe Palace and most of the sultanic mosques of the 19th century. D’Aronco made important contributions to Balyan’s new palace complex at Yıldız. This area of Istanbul had been home to Abdulhamid II since the early 1880s, and in accordance with the Sultan’s taste and desire for seclusion, the new residence was not a monumental palace in the spirit of Dolmabahçe and Çırağan, but revived the older pattern of Topkapı, with pavilions surrounding courtyards and open spaces, all enclosed by high walls. D’Aronco’s work at Yıldız encompassed all kinds of structures, from grand ceremonial buildings to humble stables. He brought European rococo exuberance to the new harem gate, and created the Merasim Köşkü, or ceremonial kiosk, for Kaiser Wilhelm’s official visit to the city in 1898. D’Aronco even designed the palace’s new porcelain factory. And in the decoration of the state apartments, he began his pioneering experiments in Art Nouveau.

D’Aronco can be credited with bringing Art Nouveau to Istanbul, where it survives as part of the city’s heritage. His work was not confined to imperial projects, and he realised that in the pluralistic Levantine environment of Pera – where he had his studio – avant-garde Art Nouveau could become the new style of the cosmopolitan urban elite, who would be likely to accept it in a way that the cities of his homeland might not. Art Nouveau’s use of modern materials and organic designs had no specific national or historical references, and the style resonated with much of the architecture built after the classical Ottoman period of the 16th and 17th centuries.

The first great Art Nouveau landmark of Istanbul was the Botter House, the seven-storey workshop and residence in Beyoğlu that D’Aronco created for the Sultan’s Dutch couturier, Jean Botter – which was followed by endless variations designed by the Italian architect’s colleagues, collaborators and rivals. The best residential urban example of his blending of Levantine and modern forms is the Santoro House that he designed for Pera, with its striking interplay of voids and projecting parts. The architect himself said that its strongly three-dimensional façade was to have a Piranesian air. Sadly, the Santoro House was never built.

D’Aronco’s most fully realised masterpiece in the new style is his set of additions to the Ertuğrul Mosque in Beşiktaş, used by the Sufi Sazeli brotherhood. In the tomb, library and fountain here – built for Sheikh Zafir, leader of the brotherhood, who was very close to Sultan Abdülhamid – he successfully combined the most abstract, rectilinear forms of the Jugendstil (German and Austrian Art Nouveau) with the late-Ottoman taste for small but exuberant landmarks.

D’Aronco’s appreciation of the city’s built heritage was wide-ranging. In addition to the classical buildings of the Byzantine and Ottoman eras, he studied Ottoman baroque architecture, becoming one of the first Western observers to take an impartial view of the style’s inventive reworking of spaces and forms. He surveyed the Nuruosmaniye Mosque, anticipating the admiring gaze of Le Corbusier, and appreciated the 18th-century cistern fountains and drinking fountains (sebils), some of which he restored after the earthquake. He even revived the exuberance of the baroque style – previously condemned as mongrel and degenerate by the Ottoman revivalists of the age of Abdülaziz – in his design of the fountain at Tophane (now relocated in Maçka). As an intuitive, anti-academic artist, the son of a contractor who had made him work on building sites from a young age, D’Aronco professed a great admiration for the Ottoman tradition of master builders (kalfa).

D’Aronco was one of the many Italian artists and craftsmen who had a significant presence at the Ottoman court. There were also musicians such as Giuseppe Donizetti (brother of the composer Gaetano) and Callisto Guatelli, who managed the opera at the Naum Theatre in Pera for some 30 years. Often attended by the Sultan, it was owned by a Syrian Catholic family, and always employed impresarios, artists and stage designers from Italy. The Neapolitan performer Arturo Stravolo, director of the theatre at Yıldız Palace, is said to have been the only actor to make Abdülhamid laugh. The Italo-Levantine community of Istanbul numbered around 15,000 when D’Aronco was active in Istanbul, and the Società Operaia Italiana (a mutual-aid society whose first honorary president was Garibaldi) survives in the city to this day.

The historian Philip Mansel has noted that the tradition of court painting did not end in one of the illustrious European royal households that had helped to create it, but in the court of Abdülhamid in Istanbul. One of D’Aronco’s contemporaries here was the court painter Fausto Zonaro, who also trained the porcelain painters in D’Aronco’s new Yıldız factory building. The architect and the painter may not have been close (there is only one mention of D’Aronco in Zonaro’s surviving diary), but their subsequent lives followed a similar pattern. Both returned to Italy after the deposition of Abdülhamid in 1909, and both died in San Remo (D’Aronco in 1932, Zonaro in 1924) – the same fashionable resort where Vahideddin, the last Ottoman sultan, spent his final days.

Despite his obvious talent, D’Aronco was a defiantly independent man who shunned the limelight. He was reluctant to mingle with high society in Istanbul, and never agreed to a press interview. As palace architect he often employed Italian masons, carpenters, decorators and labourers; an Italian ambassador to the Porte proposed that he be awarded the title of cavaliere for his contributions to the welfare of the local Italian community. In typical fashion, D’Aronco declined the honour.

Raimondo D’Aronco’s most remarkable tribute to his Italian homeland remains one of the most artistically accomplished landmarks beside the Bosphorus, though its glory is fading fast. In 1905 he submitted his designs for the reconstruction of the Italian summer embassy in Tarabya, close to the French residence on the European shore. This was a low-budget project: the Italian construction firm Seminati, who built it, agreed to be paid only with the proceeds from the sale of materials from the previous embassy building. With this wooden villa – known as Villa Tarabya to Italian diplomats today – D’Aronco married Palladian style with the layout of the traditional Ottoman mansion, organised around a central hall. The exterior is strikingly asymmetrical and combines highly dignified Neoclassical elements with vernacular forms, such as the deep overhang of the eaves. But one wonders if the eccentric character of Villa Tarabya is the reason it has been left in such a deplorable state of neglect since the 1970s. It is to be hoped that in our current age of globalism it will be reassessed and restored as a monument to international diplomacy.

Almost the entire corpus of D’Aronco’s drawings is archived at Udine’s Modern Art Gallery The examples in this article are from Diana Barillari’s exhibition catalogue D’Aronco: Ottoman Architect – Istanbul Projects 1893–1909 (Istanbul Research Institute, with the Italian Cultural Institute of Istanbul, available from the our online bookstore. Barillari and Ezio Godoli’s excellent ‘Istanbul 1900: Art Nouveau Architecture and Interiors’ (Rizzoli) is out of print, but available from Amazon