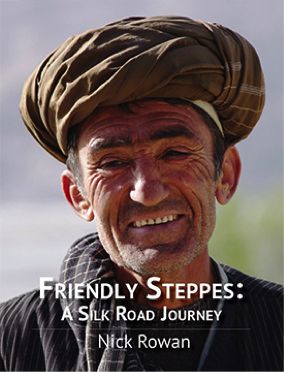 Reviewed for cornucopia.net by Robin Thomson

Friendly Steppes: A Silk Road Journey is a densely written diary of a journey from Venice to Xi’an in 2006 in a modern attempt to revisit and savour the places and people along the Silk Road. Its author Nick Rowan undertook this journey at a tender age and the narrative reflects the vividness of the impressions he gained. Travelling mostly by bus, and with his naturally outgoing nature, Nick has countless colourful encounters and is taken under the wing of many along the way: he interviews charity aid groups in a Bosnia that is slowly uncurling from the war, is initiated into the rites of a home match by the Fenerbahce team in Istanbul, is introduced to Hafiz’ poem on friendship by locals at the poet’s monument in Shiraz, is left at sea on the Caspian ferry while the vodka-fuelled crew decide when to depart Baku, and the Turkmen port authorities when to let them dock at the other end; crosses Turkmenistan at the height of the Niyazov personality cult (and in the last year of the latter’s life); and so it continues all the way to China, the intimacy thrown up by chance encounters vivid despite a sometimes clunky writing style. All this, seen through thoroughly modern eyes, is nevertheless spiked with an intoxicating mix of history.

At a recent book forum focused on Central Asia the author himself chose to read a passage from the book set in Khiva, Uzbekistan, where he finds himself invited onto the rooftop terrace of an old man. Lacking almost any common language, they sit together in a silent concentration as the sun sets and the stars come out. The old man offers bread, and when Nick thanks him, he replies (using pen and paper) that it is the host who is indebted to the guest. It is the briefest of moments in the narrative, yet perhaps the most ancient, and sublimates the essence of travel, the encounter of oneself in the other.

The book is a little long and would benefit from a good editor, which might also allow a larger typeface for ease of reading. Yet this in no way detracts from the infectiousness of the journey and the immense gifts of reception, hospitality – and sometimes difficulty – that Nick received. Perhaps the style and length of the book mirror the effort of this long, exhausting yet deeply rewarding crossing of the immense Eurasian spaces.

Nick Rowan has gone on to be editor of Open Central Asia magazine and continues to be active in many of the countries he visited on this trip. 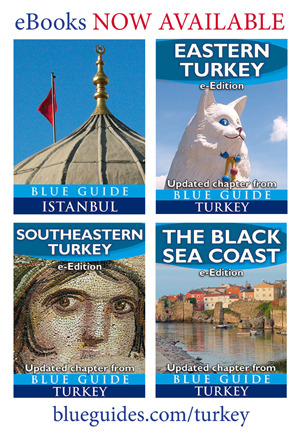