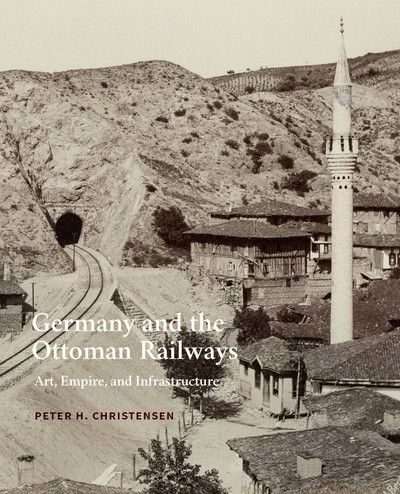 Germany and the Ottoman Railways

CORNUCOPIA NOTE: This book is now out of print. The Cornucopia subscriptions office has sourced a handful of copies, available to subscribers only on a first-come-first-served basis. Please email subscriptions@cornucopia.net before ordering. Because of its rarity, tracked or express shipping only.

The complex political and cultural relationship between the German state and the Ottoman Empire is explored through the lens of the Ottoman Railway network, its architecture, and material culture With lines extending from Bosnia to Baghdad to Medina, the Ottoman Railway Network (1868-1919) was the pride of the empire and its ultimate emblem of modernization-yet it was largely designed and bankrolled by German corporations. This exemplifies a uniquely ambiguous colonial condition in which the interests of Germany and the Ottoman Empire were in constant flux. German capitalists and cultural figures sought influence in the Near East, including access to archaeological sites such as Tell Halaf and Mshatta. At the same time, Ottoman leaders and laborers urgently pursued imperial consolidation. Germany and the Ottoman Railways explores the impact of these political agendas as well as the railways’ impact on the built environment. Relying on a trove of previously unpublished archival materials, including maps, plans, watercolors, and photographs, author Peter H. Christensen also reveals the significance of this major infrastructure project for the budding disciplines of geography, topography, art history, and archaeology.


Infrastructure connects. That is why it is built in the first place: to deliver water to bathrooms, people to their holiday resorts, electricity to city lights. For Peter H Christensen, author of the lavishly illustrated Germany and the Ottoman Railways: Art, Empire, and Infrastructure, the study of infrastructure can also provide a way to connect his discipline of art history to histories of urbanism, technology, archaeology and diplomacy. “Infrastructures make empires,” writes Christensen in this award-winning work. “The economic, social and cultural systems of empires are guided by and given form and purpose through canals, bridges, tunnels, ports, and, perhaps most importantly, railways.” From the 1870s until the demise of the Ottoman Empire, Germany was closely involved in the building of the railways of European Turkey (1871–91), the Anatolian Railways (1873–99), the Hejaz Railway (1900–08) and the Baghdad Railway (1899–18).

With lines extending from Bosnia to Baghdad to Medina, the railway network was the pride of the modernising Ottomans, bent on zipping together their empire, expanding its economic, cultural and geopolitical influence, and balancing increasing British dominance. But it was to the newly unified, bullish Germany that Sultans Abdülaziz and Abdülhamid II turned for expertise, and for funding from investors such as Deutsche Bank. Thus a vast infrastructure project became a conduit for the different – but interconnected – imperial ambitions of the Ottomans and Germany.

The collaboration of German architects and engineers, often working remotely with no knowledge of local conditions, materials or terrain, and Ottoman bureaucrats and contractors on the ground, resulted in a kind of hybridisation or “transmutation” of style. A design might be signed off by the railway company, but deviations would occur. Stations, graded 1st, 2nd and 3rd class according to their locale, might benefit from a little creative tinkering – an ornate finial here, decorative eaves there.

Contributing to a “polyculture composition” were artisans and labourers, from Albanians to Yezidis, Kurds to Sudanese, Austrians, Armenians, Bavarians, Greeks, Macedonians, Lebanese… The Baghdad Railway was the last and perhaps most famous of the four enterprises, completed during the Great War as a military effort that demanded the labour of prisoners of war, refugees and soldiers. Christensen assembles a wealth of visual material, much of it previously unpublished, including works of art, diary extracts, official documents, maps, plans and captivating photographs of “stations… urban byways, bridges, monuments, and archaeological artifacts” dispersed from Berlin to Baghdad. He explores the ways in which encounters – between locals and experts, policymakers and workers, places and materials – shaped the Ottoman railways, as the railways shaped the urban environment.

The classic narrative of the Ottoman railways emphasises their role in the modernisation of the Ottoman state, and the ways in which they reflect its cosmopolitanism. Christensen, however, argues that the “nature of the German-Ottoman railway partnership and the… defining characteristic of the railway network” was “ambiguity”, as he seeks to highlight how multinational, multi-ethnic and multi-professional actors negotiated the workings of and meanings attached to the construction of railways, distinct from the strictly ideological, imperialist or profit-driven ambitions of the policymakers.

Clearly a project such as the Ottoman railway network had different meanings for the Yezidi labourers toiling on it, the Ottoman soldiers guarding it, the Ottoman politicians advocating it and the German capitalists backing it. It is this web of meanings that Christensen explores, “within a span of time that corresponds, on the one hand, to an era of German ascendancy on the global stage and, on the other, to the inversely proportional unravelling of the Ottoman empire”.

In his chapter on topography the author explores the maps of Mesopotamia created by Wilhelm von Pressel, one of the minds behind the German–Ottoman railway enterprises, which “have the air of a graphic story and an elegant, accessible beauty… they privilege the railways’ scenographic qualities by cleverly downplaying their political aspects and formidable engineering challenge”.

In another chapter Christensen shows how “discoveries and documentation” by German archaeologists helped to redefine the landscape through which the railways ran, as a “cultural domain”. Impressively, he studies the various stations and bridges constructed along the Baghdad Railway, and their stylistic evolution, tracing how prototypes and templates designed in Germany gradually mutated to respond to the specific needs of physical, political and social landscapes.

The grandiosely Neoclassical Haydarpaşa Station, built in 1909 on the Asian shore of the Bosphorus, to designs by the Germans Otto Ritter and Hellmuth Cuno, as the western terminus of the Baghdad and Hejaz Railways, is the most striking example of the idea of “ambiguity”, its architecture self-consciously linking Berlin to Baghdad while being further shaped by its context.

The author could have dwelt longer upon the numerous artefacts he mentions, to explain their relevance and importance to the book’s overarching arguments, instead of moving swiftly on to a run of very short chapters, leaving the reader craving more context and denser narrative. Moreover, his loose use of “ambiguation” – the key concept of the book – reduces its analytical power.

In the chapter on archaeology, he rather skips through the fascinating story of how radically the Ottoman archaeologists’ and museum officials’ perception of the ancient finds discovered during the construction of Haydarpaşa Station differed from that of the Germans, only to devote many words, in his chapter on monuments, to the already well-known and much-studied, iconic Neo-Renaissance German Fountain in Sultanahmet. A gift from Kaiser Wilhelm II, in grateful remembrance of his 1898 visit to Abdulhamid II, and inaugurated in 1901, it was itself an object of ambiguity, leading to a protracted debate between the Ministry of the Interior, the Ministry of Foreign Affairs, the Ministry of Public Works and the grand vizier as to whether the fountain was a diplomatic symbol or a waterworks, and, in that case, who was responsible for its upkeep. The citizens of Istanbul, clearly seeing it as a diplomatic symbol, not as a site of ablution, simply washed their hands of it.

It would have been good to read in as much detail about less-well-documented examples of “vernacular symbolism” such as the memorial in Çamalan, in the province of Mersin, to German nationals killed during construction of the Baghdad Railway. Gerhard Ager, Richard Buisman, Markus Chmel, Gunter Hitsch… There are no fewer than 40 of them, leaving one to imagine how many unnamed Egyptians, Druze, Bedouins, Circassians and Cretans perished in pursuit of this heroic endeavour.

Germany and the Ottoman Railways shows how infrastructures create an impact far beyond the simple geopolitical, economic or ideological ambitions of their architects.