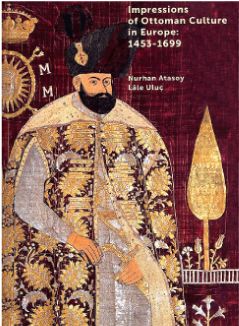 Impressions of Ottoman Culture in Europe

Published by Armaggan Publications
Out of Print

‘Nurhan Atasoy's voyages of discovery in Europe are already known through İpek, the superb survey of Ottoman silk textiles she led to publication in 2003. Now they have delivered another swathe of material, much of it new.’
Tim Stanley, Cornucopia 47

Reviews for Impressions of Ottoman Culture in Europe

‘Nurhan Atasoy, the grand dame of Ottoman history and chronicler of its artistic wonders, may well spark another revolution with her new work.’ Melik Kaylan, Newsweek

This book is an impressive encyclopedia of the ways in which Ottoman material culture is reflected in the objects and images produced in the parts of Europe that did not fall under direct Ottoman control. The period it covers runs from the conquest of Constantinople by Mehmet II in 1453 to the end of the War of the Holy League in 1699, when Ottoman military expansion on its European frontiers ceased for good, and the Europeans lost their awe of the Ottomans. The book’s impact is vivid and immediate thanks to its 400 colour illustrations of high quality. These would be a useful resource if the authors had merely brought together what was already known, but they are a good deal better than that.

Nurhan Atasoy’s voyages of discovery in Europe are already known to us through İpek, the superb survey of Ottoman silk textiles she led to publication in 2001. Now they have delivered another swathe of material, much of it new, and, for me at least, exciting. Lâle Uluç’s contribution is also very evident. As in her work on Shirazi painting in Turkish collections, she has helped bring order and argument to an enormous body of material.

In the 250 years the book surveys, a variety of European attitudes developed. The cover shows a detail of a piece of red velvet embroidered and worked in appliqué with the funerary portrait of Ieremia Movila, ruler of Moldavia, who died in 1606; it comes from his tomb in the monastery of Sucevita, of which he was a founder. Ieremia wears a boldly patterned Ottoman kaftan over a robe of real seraser, or cloth of silver, and is shown flanked by cypress trees growing in beds of tulips and carnations. The Latin-style arms remind us that he was a Polish as well as an Ottoman vassal. But hybrid as this portrait may be, the use of Ottoman elements reflects the everyday reality of Ieremia’s relations with his Turkish suzerains. It all makes sense.

A very different impression is left by a dramatic portrait of the Dutch merchant Nicolas de Respaigne, painted after he returned home from Venice, where we assume he was engaged in trade with the Ottomans. Here we enter the world of high art, for the portrait is by Peter Paul Rubens. Unlike Ieremia Movila, de Respaigne had no regular, direct relationship with the Ottoman authorities. There is no sense of serious intent, of power being exerted. It is a bourgeois exercise in fancy dress, a display of wealth and a certain sophistication cobbled together by someone with access to carpets and felt caps. Sitter and artist show no real sign of understanding the Ottomans, or caring. They simply thought Ottoman things were pretty.

One image in the book, a rare snap rather than a professional photograph, has a special relevance for me. In 1989, I took an opera tour to Bulgaria. It was a disaster. Balkanturist were so desperate for Western currency that they lied about everything – not a single opera was performed in any house in Bulgaria while we were there, and we had to watch terrible ballets. Even more upsetting were the noises coming from the radio in my hotel room, with the dictator Todor Zhivkov ranting about istoricheskite fakti – the very falsehoods he used to justify forcing the Turks in Bulgaria to adopt Christian names. And my best friend in Bulgaria was annoyed with me because I had not thought to bring her a copy of The Satanic Verses, which was banned there.

But the tour included a visit to the Rila Monastery, high in the mountains, and in the museum there I saw an altar frontal made of Ottoman velvet of an early date. I was able to tell Nurhan about it later, when she began her search for Ottoman textiles in Europe. The illustration of one of the frontals from Rila in this book is the only positive outcome of my terrible trip.