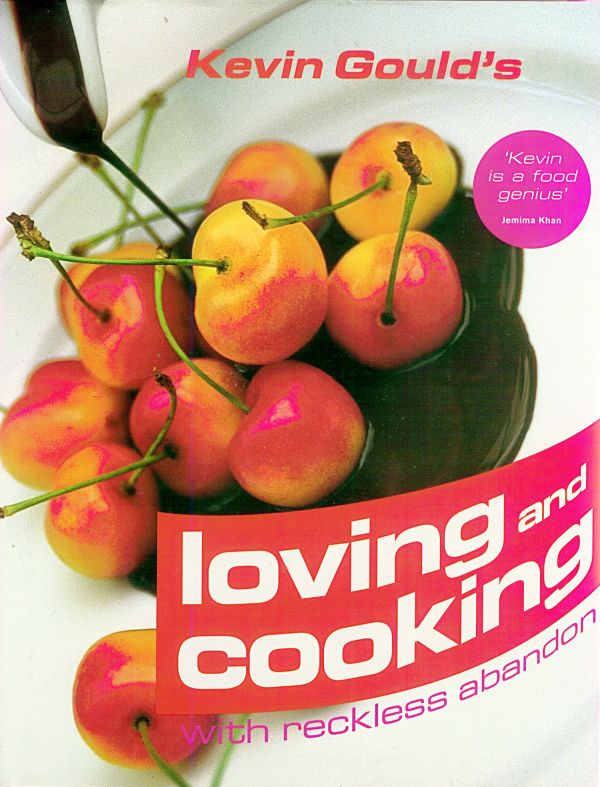 Loving and Cooking with Reckless Abandon

By Kevin Gould
Published by Palgrave Macmillan
Out of Print

Unlike Kevin Gould’s first book, the design award-winning Dishy, this one actually looks at first glance like a conventional cookery book. Appearances are deceptive, though. A 14-line recipe (there are recognisable recipes) for Egyptian Rice with Vermicelli is prefaced with five pages of atmospheric description of the streets and street food of Cairo–and why not? The long chapter called Eating With A Lover kicks off with Consummation Consommé and continues with White Asparagus Wrapped in Ham–the accompanying photograph displays a mound of phallic spears sheathed (no other word will do) with prosciutto. Airily citing the Satyricon as a precedent, Gould gives a set of 12 Signs of the Zodiac Mezze, combinatorial markers of erotic compatibility: “Do your dishes mix?

Haçik Keshisian was the master of the massaged shoulder. An Armenian whose father had served in the first democratic Turkish parliament, Haçik and his family landed up in London, England, where, towards the end of his life he ran a modest kebab shop in Camden Town. Pam Pam (an Armenian allegory for the act of love) was a magnet for food lovers.
Service was never fast, often eccentric, but the tiny storefront was usually crammed with patient customers who would while away the wait alternately drinking in the savoury aroma of sizzling lamb and dipping hot pitta bread into Haçik’s incomparably creamy mança (a mezze of strained, beaten yoghurt, briefly introduced to a clove of garlic before coming together with the chopped leaves of greenest baby spinach. Yum!)
“Shoulder!” Haçik would point to his own broad, brawny specimen for emphasis, “that’s where the bloodyhell best flavour is!” Head shaking in admiration of the beauty that would become his creation, Haçik demonstrated that this cheap cut of lamb needs special attention if it is to achieve its full flavour potential.
“Relax the meat. Make it very ready for you, take the flavourings, and push and rub, like this:” His concentration was absolute – this man was doing more than simply cooking supper, he was uniting with it - communing is not be too loaded a word to describe the affectionate attention he would pay to his ingredients. Winking, Haçik vouchsafed one day that the secret of his cooking was the same as that of his happy marriage. “Only I don’t, you know, kiss the food, my god!”
This recipe is inspired by, and is dedicated to the fond memory of Haçik Keshishian, who died in 1992, having served so many people such heavenly food.

A bone out shoulder of lamb, approximately 2kg
2 cloves garlic
The juice of a lemon
A bunch of mint
Olive Oil
Black pepper
Trussing string

Prepare:
Pre-heat the oven to 230ºC.
Slice the garlic cloves in two, and rub the meat all over with the cut end.
Roughly chop the mint, moisten it with lemon juice and olive oil and grind a few turns of the pepper mill over it.
Lay the meat fat side up.
Slowly and methodically, start to massage this aromatic mixture into the meat with your fingertips. Allow at least 10 minutes for this and allow your own stresses to disappear with your kneading and pinching movements.
Turn the meat over, and repeat the massage, re-moistening the mixture as you need.
Spread the minty mixture all over the joint, then roll it lengthways.
Tie it with trussing string, with cut pieces of string secure the joint with four slip knots.
Link the slip knots together top and bottom with a continuous length of string, and tie off.

Assemble:
Place the joint on a rack in a roasting tin containing a cup of water in the preheated oven.
Immediately reduce the heat to 220ºC and roast for 30 minutes.
Baste the meat well with the pan juices, turn the joint over and turn the heat down to 180ºC. If the juices in the roasting pan are burning, add a further cup or so of hot water to them. Roast for around an hour, remove from the oven, and let the joint rest, loosely covered in aluminium foil for 15 minutes.
Pan juices should be skimmed of fat (just lay a double thickness of kitchen paper over, then discard), deglazed with a tablespoon of vinegar and heated in a saucepan so that they bubble and reduce.
Remove the string from the joint and serve it sliced, with its juices.

Notes:
Skewering the meat in order to test for doneness does not count as acupuncture.
Giving the meat a VIP topless massage might make you feel better, but is unlikely to significantly improve its final flavour.
The garlic/lemon/mint/pepper flavourings may be substituted for an Oriental mixture of peanut oil, fresh lemongrass, chilli and sweet basil. However, take advice from friends and therapists before attempting a Thai full body massage.