Store > Books > The Man Who Created the Middle East 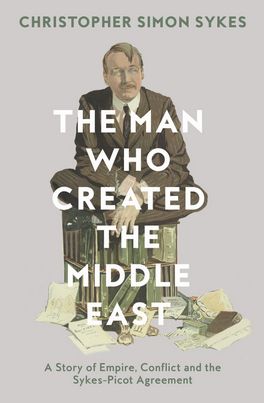 The Man Who Created the Middle East

Story of Empire, Conflict and the Sykes-Picot Agreement

Sir Mark Sykes has often been regarded as the ignorant toff who conspired with the French and Russians in World War I to redraw the map of the Middle East. The Sykes-Pikot agreement cut across both tribal and religious boundaries and went against the promises of autonomy made by the British to the leaders of the Arab Revolt, causing TE Lawrence to complain, “We are calling on them to fight for us on a lie.” It also gave ISIS leader Abu Bakr al-Baghdadi the title of ‘breaker of barriers’, when his henchmen were filmed ploughing up the field between Syria and Iraq.

This book is by Sykes’s grandson, and through personal papers enlivened by Mark Sykes’s own illustrations it attempts to give a more nuanced view of the man, even if he cannot be totally exonerated. In Cornucopia 59 Christopher Sykes recalls his father’s love of Ottoman ceramic art, and the Turkish Room that he created in the family home, Sledmere, in Yorkshire, which was decorated with 2,700 Iznik-style tiles from Kütahya.

Reviews for The Man Who Created the Middle East

‘[Christopher Simon Sykes] tells this story with gusto… put[s] a human face on a imperialist adventurer, and in this he succeeds brilliantly. Mark’s fiercely independent spirit shines through’ – Spectator

‘Sykes shows his grandfather in a clearer light, damaged by parents, bubbling with enthusiasm, deeply in love with his wife, an entertaining father at home, an amusing observer of people in the world – the book is lightened by many of his character sketches’ – Observer

The Lighter Side of Making History

People have been writing biographies and studies of Mark Sykes ever since his untimely death at the age of 39 from Spanish influenza during the Paris Peace Conference in 1919. He was a prolific writer both as an author and later as a public servant, and also a talented amateur cartoonist, so there is plenty of material to draw upon.

One of the delights of this book by his grandson is that almost every page has a sketch by Sykes himself. Originally they helped bridge the gap for a father-traveller and official who was usually away from home but wanted to share his life a little with his wife and children. Today they enable us to see things as he saw them and to share his amusement.

The collapse and partition of the Ottoman Empire was something the world had known was coming for almost a century. The first wave of partition in 1878 created a set of fully independent Balkan states which survive to this day. After 1918 the Islamic Middle East fared differently, with an imperialist carve-up of former Ottoman territories in the Middle East. Arab nationalist movements had to contend with the governments of France and Britain, who wanted an imperial presence in the Middle East – and also with Zionists hoping to create a Jewish homeland. Tsarist Russia, which would initially have been a major beneficiary, getting Istanbul and the Turkish heartlands, was plucked out of the equation by the 1917 Bolshevik Revolution.

In 1915 Sykes joined a committee of British officials considering the future of their country’s interests in the Ottoman Middle East after the war. Representing Lord Kitchener, the secretary of state for war, Sykes was the most junior appointee, only chosen because, writes his grandson, “he was one of the few people in the War Office who had any first-hand knowledge of the Ottoman Empire”. He quickly became its driving force.

The British had to square both the Arab nationalists, who were military allies against the Ottoman Empire, and France, which had its eye on Syria and parts of southern Turkey. The Arabs were basically double- crossed. The interests of other nationalities, notably the Turks, were simply ignored. Later that year, Sykes began detailed negotiations about the borders of the post-war Middle East with François Georges-Picot, a French official who dreamed of creating a giant French colony in Syria, an Algeria of the Eastern Mediterranean. He did not get that, but he certainly extracted an unequal deal from Sykes. On May 19, 1916, three years to the day before Atatürk landed at Samsun to start Turkey’s War of Independence, Britain and France confirmed the deal in a secret treaty which became public after the war.

In its early years the deal looked outrageous to those who lost from it: Arab nationalists and Ottoman Turks. These days, anachronistically, denunciations of Sykes-Picot are usually coded declarations of support for the creation of a Kurdish state. Before the war, Sykes had generally been pro-Turkish, the author of travel books that are often more sympathetic to the Ottoman Turks than to the Christian minorities, which in the post-Gladstonian first decade of the 20th century meant swimming against a largely Philhellene climate of prevailing opinion.

War, of course, changed everything, though I am not sure that Sykes, like his friend and fellow writer-cum-aristocrat- cum-politician Aubrey Herbert, would not have ended up vainly lobbying for the Turks in Parliament after the Greek invasion of Anatolia, had he lived long enough. A remark he made to Herbert about partitioning the Ottoman homelands, quoted by Sykes, sounds to me more like slightly cruel teasing between friends than serious discussion.

In some ways the most interesting parts of this book are not the technical, though not entirely academic, sections on the war and the treaties, but the biography of an absolutely extraordinary but very engaging man. Sykes’s early years sound like episodes lifted from well-known novels, but with real life outdoing fiction. His father had been trapped into marriage like the character Johnny Eames in Trollope’s The Last Chronicle of Barset, who barely escapes this fate. His mother then turned out to be a posher, more flamboyant version of the spendthrift, promiscuous Becky Sharp from Vanity Fair. Sykes did poorly at school and university, and fathered a baby by a girl from the estate at only 15, though he was never told. His father hanged his dogs as punishment.

Somehow from this highly disturbed background there stepped out not a neurotic or an alcoholic, but a good- natured, highly intelligent, happy family man of boundless energy and administrative capacity, with a fluent writing style. One can only wonder what he might have gone on to if he had not succumbed in the prime of life to the flu bacillus.

One of the few deficiencies in a book that overall suggests that some of the grandfather’s virtues have descended through the generations is a curious lack of empathy about Sykes’s Turkish interests. The “Turkish Room” he built in his family home at Sledmere passes unnamed. Kütahya tiles become “Anatolian tiles”. Yet the night he fell ill, Sykes spoke of the nationalist movement in Anatolia, suggesting a prescience about Turkey that was then more or less unique in Britain. It was perhaps a glimpse into a future that would be denied him.