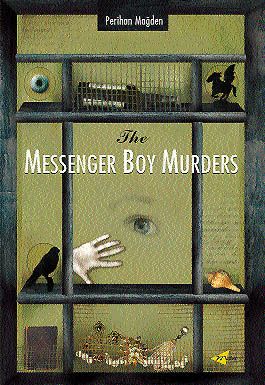 By Perihan Mağden
Published by Milet Publishing, London
Sorry, this item is currently unavailable from Cornucopia.

‘Last year Milet, a heroic London-based publishing house, launched a series of dual-language books by well-known Turkish fiction writers, and this summer it moved beyond the big names of yesteryear to publish a (single-language) translation of Perihan Mağden’s The Messenger Boy Murders. Set in a city that feels Russian but is populated with Chinese names, full of nineteenth-century languor but speckled with Hollywood references and overshadowed by a villainous fertility expert, it is difficult to categorise, impossible to put down.’ Maureen Freely, Cornucopia 2004

The Visible Poets series from Arc Publications comes with a lofty and rather alarming mission statement. It aims to challenge the view that poetry in translation should sound vaguely like English. According to its editor, Jean Boase-Beier, translators should work not to hide but to reveal the original text. Their own labours should be just as evident. Above all, they should not worry about putting off the punters. The true devotee of poetry is a sophisticated animal who turns to verse “to experience the strange, the unusual, the new, the foreign”, who “delights in the stretching and distortion of language that makes any poetry, translated or not, alive and distinctive”. That’s the theory, anyway. I can’t imagine what would happen in the wrong hands. But only the best hands are in evidence so far. The great virtue of this series is its emphasis on active collaboration during the drafting stage. This gives the poets more control over the translator’s choices while also freeing the translators to take greater liberties than they might have allowed themselves had the poets not been involved. Cevat Çapan and Michael Hulse first met in 1993 at a symposium on poetry and translation organised by the British Council in Istanbul. Their first collaborative task was to translate a poem called Taş Baskısı (The Fire). Hulse has no Turkish; Çapan has a Cambridge degree. Çapan provided Hulse with a literal version of the text and Hulse played around with it. Hulse, a distinguished poet in his own right, dared to give the English version a different shape, a different beat, a different title and a different logic. But it was by taking these liberties that he was able to convey the melancholy music of the original. Çapan was so pleased that he suggested they continue the collaboration. This they did in dribs and drabs for the better part of a decade. Hulse was forever mindful of the limitations of their method. He encouraged Çapan to be severe if he felt Hulse had lost too much in translation or strayed too far away from the original. They would then work together to come up with solutions that suited them both. To read this dual-language edition is to get a real and very pleasurable sense of a dual intelligence. The spirit of the original is evident in Hulse’s English, but it never overpowers his own poetic voice. It pays close attention to Çapan’s tricky modernist surfaces without ever losing the Anatolian rhythms that underpin it.

Sorry, this item is currently unavailable from Cornucopia.