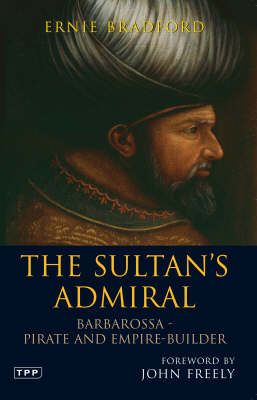 ‘Ernle Bradford has brilliantly recreated Barbarossa's remarkable life alongside a vivid portrayal of the Ottoman and Mediterranean worlds at this thrilling moment in history.’

This is the first paperback edition. It is the only biography of Barbarossa - a legendary and important historical figure. Ernle Bradford was a widely respected historian and author of many, now classic, books. Admiral, naval hero, privateer, warrior and empire-builder, Kheir ed-Din or Barbarossa, as he was known in the West, was a legendary figure. Born on Lesbos in Greece, he rose to become High Admiral of the Ottoman Navy, Sultan of Algiers and friend and advisor to Suleiman the Magnificent.His life dominated the history of the Mediterranean in the 16th century. From the moment that he and his brother, Aruj, established themselves on the North African coast, the pattern of life and trade in the Mediterranean changed forever and for nearly 300 years after it was affected by the activities of raiders from what came to be called the Barbary Coast. His achievements in re-organising the Ottoman Navy and his command of it helped the expansion of the Turkish Empire that threatened all of Europe. When he died, Turkish records for the year recorded ‘The King of the Sea is dead’.

In this definitive biography, Ernle Bradford has brilliantly recreated Barbarossa’s remarkable life alongside a vivid portrayal of the Ottoman and Mediterranean worlds at this thrilling moment in history.

Ernle Bradford (1922-1986) was a prominent British historian specialising in the Mediterranean world and naval history. Bradford served in the Navy for the duration of World War II and later travelled throughout the Mediterranean, living for a while on Malta. As well as becoming a broadcaster for the BBC and a magazine editor, he was the author of many acclaimed books, including biographies of Cleopatra, Hannibal, Caesar and Nelson as well as ‘The Mediterranean’. ‘The Story of the Mary Rose’ and ‘Ulysses Found’.