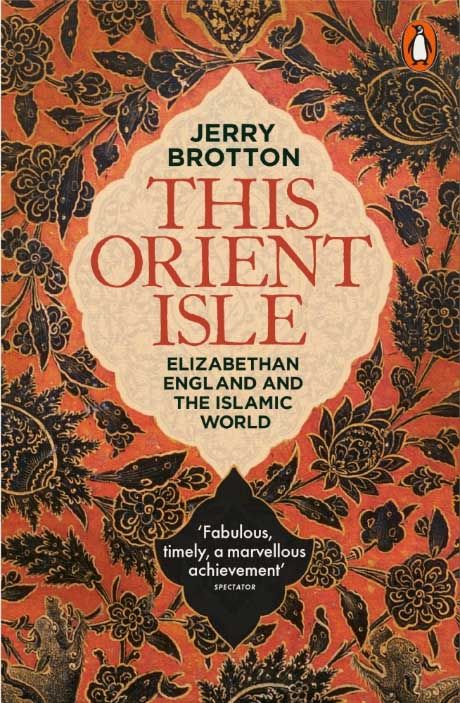 Elizabethan England and the Islamic World

In 1570, when it became clear she would never be gathered into the Catholic fold, Elizabeth I was excommunicated by the Pope. On the principle that ‘my enemy’s enemy is my friend’, this marked the beginning of an extraordinary English alignment with the Muslim powers who were fighting Catholic Spain in the Mediterranean, and of cultural, economic and political exchanges with the Islamic world of a depth not again experienced until the modern age. England signed treaties with the Ottoman Porte, received ambassadors from the kings of Morocco and shipped munitions to Marrakesh. By the late 1580s hundreds, perhaps thousands, of Elizabethan merchants, diplomats, sailors, artisans and privateers were plying their trade from Morocco to Persia.

These included the resourceful mercer Anthony Jenkinson who met both Süleyman the Magnificent and the Persian Shah Tahmasp in the 1560s, William Harborne, the Norfolk merchant who became the first English ambassador to the Ottoman court in 1582 and the adventurer Sir Anthony Sherley, who spent much of 1600 at the court of Shah Abbas the Great. The previous year, remarkably, Elizabeth sent the Lancastrian blacksmith Thomas Dallam to the Ottoman capital to play his clockwork organ in front of Sultan Mehmed. The awareness of Islam which these Englishmen brought home found its way into many of the great cultural productions of the day, including most famously Marlowe’s Tamburlaine, and Shakespeare’s Titus Andronicus and The Merchant of Venice. The year after Dallam’s expedition the Moroccan ambassador, Abd al-Wahid bin Mohammed al-Annuri, spent six months in London with his entourage. Shakespeare wrote Othello six months later.

This Orient Isle shows that England’s relations with the Muslim world were far more extensive, and often more amicable, than we have appreciated, and that their influence was felt across the political, commercial and domestic landscape of Elizabethan England. It is a startlingly unfamiliar picture of part of our national and international history.

On Her Majesty’s Service

Cornucopia readers will know of Thomas Dallam, the organ-maker sent to Constantinople by Queen Elizabeth I in 1599 to assemble an organ for Sultan Mehmed III. Dallam’s diary was recently translated into modern English by John Mole.

Jerry Brotton’s new book sets out to illuminate the relatively little-known origins and consequences of that and other relationships forged between Elizabethan England and the Muslim world, describing in a scholarly but lively manner the opening of English minds to the mysterious East over a period of 40 odd years, between the visit of Anthony Jenkinson to Persia and the accession of James I. It was an era when England first drew on a network of hundreds, if not thousands, of spies, diplomats, traders, adventurers and privateers across the Mediterranean, from Marrakech to Istanbul, and beyond to Qazvin in Persia. When the Pope excommunicated Elizabeth in 1570 he made her a legitimate target for assassination, and the Catholic powers of Europe placed Protestant England on an Axis of Evil with their Muslim neighbours.

The rogue state was full of energy and resource and determined to find friends and allies elsewhere. Morocco and the Ottoman Empire stood ready to make trouble for a belligerent Spain. In 1578 Sir Francis Walsingham composed a “Memorandum on the Turkey Trade”, detailing the advantages and the obstacles. English ships were already in the ironic position of carrying scrap bell metal stripped from English religious houses and churches to Morocco and Istanbul, where they were used to found cannon that could be turned on Catholic enemies.

The man tasked with making friends with the Ottomans, on the principle that my enemies’ enemy is my friend, was William Harborne, who arrived in Istanbul in 1578. “Charismatic, tenacious and resourceful”, as Brotton says, Harborne’s negotiations with Grand Vizier Sokollu Mehmed Pasha secured not only trading privileges for English merchants but even the first of many letters from Murad III to Queen Elizabeth. “Write the letter,” Sokollu Mehmed reportedly snapped at his chancellor, “because they are Lutherans, and good people!”
The letter was “transported in a satin bag tied with a silver capsule – the method used to write to Caucasian princes”, Brotton notes drily, indicating its lack of importance to the Ottomans. But Harborne still walked around Istanbul with two janissaries in attendance.

Two years later, despite Sokollu’s assassination and the turmoil of revolving grand viziers, Harborne secured a “triumphant conclusion to nearly three years of tireless trade, diplomacy and bribery”. To French and Habsburg fury, the famous Capitulations gave English merchants full commercial rights in Ottoman lands, with privileges that remained in force for another 343 years, until the dissolution of the Ottoman Empire in 1923. He would later return to Istanbul as an accredited ambassador, appointing a network of consuls across the Empire to smooth trade – which brought returns to the English of nearly 300 per cent on five annual voyages to Ottoman ports, worth £70,000 each – and to deliver intelligence to Elizabeth’s cabinet.

He also struggled to persuade the Ottomans to act to divert the great Spanish Armada aimed at England in the summer of 1588. “I performed my utmost endeavour by setting one enemy of God his church against the other to impair the same.” Here he had rather less success: it was the royal court in Marrakech, not Istanbul, that let off fireworks to celebrate the Armada’s defeat. But by his retirement in 1588, to peaceful Norfolk obscurity, Harborne had secured Anglo-Ottoman commerce, established England’s first embassy in the Muslim world, created a consular trading network across the Mediterranean and, perhaps not least, rescued scores of English captives from the galleys.

Those galley slaves are a reminder that not all Eastern adventures were high-tone diplomatic affairs, though Brotton has plenty of those, some of them more colourful and surprising than Harborne’s doughty service in Istanbul.

Elizabethan England was essentially parochial, sedentary and agricultural, but it sent forth Anthony Jenkinson, a bold young merchant who introduced himself in short order to Ivan the Terrible, Süleyman the Magnificent and Shah Tahmasp of Persia; and Anthony Sherley, a profligate rascal who used a reception at the Shah’s court to intrigue and booze himself into oblivion around the courts of Europe. As for renegades, we meet Hassan Ağa, eunuch and adviser to the Algerian court, formerly a Great Yarmouth merchant called Samson Rowlie; and Dallam’s guide, his “Turk”, who turned out to be “an Englishman, borne in Chorley in Lancashire; his name Finch”.

Between these electrifying narratives of traders and diplomats forging their own enthusiastic, uneasy or dishonest relations with the Muslim world, Brotton has the English stage serving as his chorus. He observes that Turks, Moors and Persians trod the boards in 60 English plays between 1576 and 1603, developing gradually from the crude paynim (non-Christian) of medieval miracle plays towards more complex characters with the ability to attract as well as repel their Christian audiences: Shakespeare’s conflicted Moor, he argues, trumps them all.

Here the detail sometimes threatens to overwhelm the reader, but Brotton is right to see the plays as a sounding board for ideas and attitudes emerging in Elizabethan England. After Elizabeth’s death England’s religious crisis passed, and attention shifted to the opportunities and challenges offered by the New World: to The Tempest, rather than Othello.

In a delicate coda to the narrative, Brotton offers a glimpse of his own Yorkshire childhood in the 1970s, playing and learning in a school with Muslims, Hindus and Sikhs. “Not a multicultural idyll…neither was it defined by theological absolutes.” Sir Francis Walsingham would have understood him perfectly.