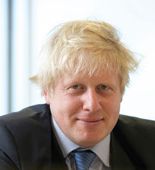 Journalist, popularist politician and best-seller historian, the US-born Boris Johnson was elected Mayor of London in 2008, and was foreign secretary in Teresa May’s government 2016–2018. In 2019 he became prime minister, after acting as the front man for the successful anti-European Brexit campaign backed by the US and others, in which he had used ‘the Turkish threat’ as a key argument in his campaign. He is currently responsible for the United Kingdom’s initially catastrophic handling of the Coronavirus pandemic, in which testing is severely restricted and is thought to have put more than 200,000 lives at immediate risk. This was after declaring that the mayor who kept the beaches open in the horror film Jaws was his greatest cinematic hero.

On his father’s side, Johnson is a great-grandson of Ali Kemal Bey, a Turkish journalist known as ‘İngiliz Ali’ working for the British during the occupation of Constantinople and the Interior Minister in the government of Damat Ferid Pasha, noted for his outlawing of Atatürk and attempts to prevent the emergence of an independent Turkey.

In Cornucopia 20, while Borish was still editor of the Spectator, he paid tribute to Özdem Sanberk, Turkish Ambassador to London.