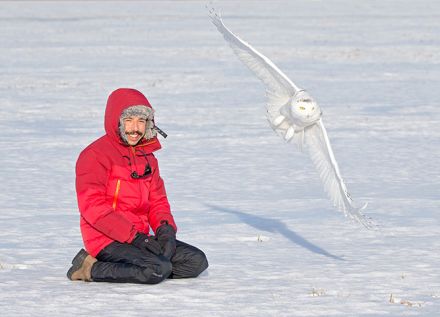 Emin Yoğurcuoğlu is a wildlife specialist who holds the record of the most birds observed in Turkey so far. He had his first bird observation at the age of 12. He always had an instinct to explore nature and birds were the easiest animals to find around his house in the capital Ankara. He travelled to almost every region in the country by the age of 21. He is now 31 and has photographed 433 of 485 bird species existing in Turkey. Beyond Turkey, he has stepped foot on no fewer than six of the world’s seven continents, including Antarctica, and seen 30% of the 10,000 bird species known to exist on the planet. He has a bachelor degree on wildlife and continues his professional career on this major. He has led and participated in many research and birding trips around the world in more than 50 countries.

Emin started off his latest journey with the idea of acting as ‘Bird Detective’. His primary objective is to reveal the relationship between birds and humans. ‘It’s not easy to pursue the winged civilization,’ he says. ‘It requires energy, time, hard work and sacrifices. Once you bring out your own wings and start to emigrate among the birds you feel the freedom.’ His account at instagram now has more than 60.000 followers. https://www.instagram.com/birddetective/.

His first article in Cornucopia covered the amazing Kızılırmak Delta near Samsun, on the Turkish Black Sea coast.