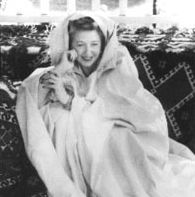 Lesley Blanch was born in June 1904 and died in 2007, aged 102. She studied painting at the Slade, and later designed book jackets for TS Eliot at Faber. She was, from 1937 to 1944, the dynamic and imaginative features editor at Vogue.

Elegant and devastatingly pretty, she had many admirers and was married to the French novelist Romain Gary for fifteen years. She travelled extensively, principally in the Middle East, and during her long and extraordinary life wrote 12 books, the best-known of which is The Wilder Shores of Love, which has never been out of print since it was first published in 1954.