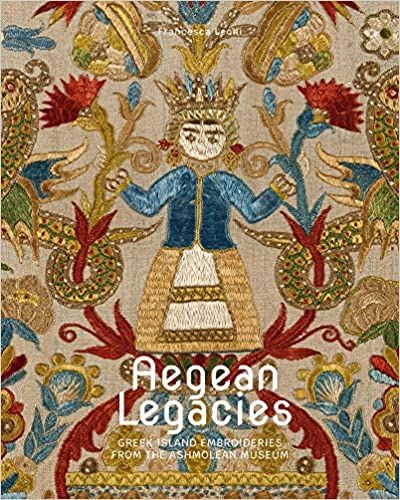 Greek Island Embroideries from the Ashmolean

Embroideries from the Greek islands dazzle with their bright colours and charming motifs. This publication reveals little-known pieces from the Ashmolean Museum at the University of Oxford, newly photographed and published here for the first time. The embroideries include fragments of pillowcases, bed valances, tents and curtains, as well as items of dress. As with all collections of textiles, the story of the Ashmolean holdings is chiefly about their makers and their ingenuity. Once forming the bulk of bridal trousseaux, Greek embroidered textiles were produced and maintained by young and old women for themselves and the house using locally produced materials. A mark of their worth and a platform for self-expression, embroidered textiles also helped Greek women to negotiate their place in the community, signalling status and affiliation.


Dr Francesca Leoni, Curator of Islamic Art at the Ashmolean, and Susan Stanton, the Textile Conservator, have together produced this attractive catalogue for the museum’s recent exhibition Mediterranean Threads: 18th- and 19th-Century Greek Embroideries. In the introduction Dr Leoni points out that the reasons for the surprising technical and stylistic diversity of Greek embroideries, given that they come from a relatively small area of the Mediterranean, are not fully understood. She explains that the aim of this publication is “to contribute fresh evidence and perspectives”.

After an essay about the history of the Greek archipelago which identifies three major cultural influences – Mamluk Egypt, Renaissance Venice and Ottoman Turkey – Dr Leoni explores why Greek Island embroideries were so avidly collected by the British. One reason was that the Arts and Crafts Movement re-positioned embroidery as an art rather than a domestic craft; another was the growing economic and political emancipation of women in Britain. Her arguments are persuasive. The collectors, all men, may initially have been prompted to buy embroideries for philanthropic reasons, as a way of giving money to families who were struggling with poverty, but charity grew into a fascination with the subject.

The second, larger part of the catalogue is devoted to the 25 embroideries from the Ashmolean’s collection, the majority of which were given to the museum by two donors with links to Oxford, the anthropologist Prof John Lynton Myers and his student John Buxton.

The study of Greek history and culture was thought to be an essential part of education during the lifetime of the major British collectors, and their focus on the embroideries of the islands, rather than the mainland, was explained by the fact that their insularity “has modified any alien influences which have reached them, and their inhabitants, like their language and their culture, are essentially and naturally Greek” (The Burlington Magazine for Connoisseurs, Nov 1914).

This may seem surprising, given that the expansion of the Ottoman Empire across the Aegean had begun in the middle of the 15th century, and all the islands had at one time or another come under Ottoman rule. Little Ottoman influence can be seen in the embroideries, however, with the exception of those from the Sporades group of islands and the mainland region of Epirus; where these exist, they are highlighted in the text.

Short introductions are given to the seven main geographical groups; the main technical and stylistic characteristics are illustrated with pieces from various collections, and maps clearly indicate the different regions. This is followed by the catalogue proper.

Each piece is illustrated in its entirety, together with a close-up detail in which the ground fabric, the embroidery threads and the individual stitches can be seen clearly. Supplementary illustrations from other collections have been included where appropriate to illustrate probable design sources, which include a 16th-century Ottoman tile panel and a French pattern book of 1598. Each of the museum’s embroideries is published with a detailed technical analysis so that the reader can see where similarities and differences exist.

The staggering variety of designs and ways they are treated must surely have delighted the men who collected them. There are the colourful cockerels of Skyros, the monotone lace-like patterns of Naxos, the rather stiff parrots of the northern Dodecanese and the jewel-like colours of the Renaissance patterns of Crete.

An appendix lists the seven other museums in Britain with substantial collections of Greek Island embroidery, giving details of how to access them online. There is also a very good bibliography.

This catalogue does not claim to offer a comprehensive survey of the subject but provides the reader with a glimpse of the wonderful pieces that have survived and invites further exploration of the subject. This is a well-designed book full of beautiful pictures, and a generous amount of space has been given to the layout of the text and illustrations, which makes it effortless to read and tempting to dip into.