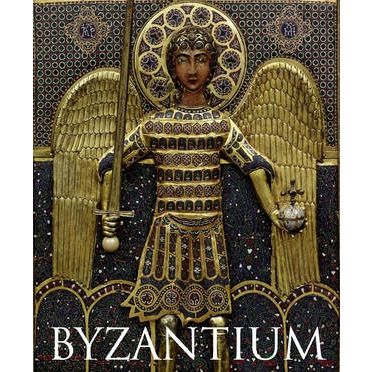 
Published by The Royal Academy of Arts
Sorry, this item is currently unavailable from Cornucopia.


Sadly, the 18 objects from Turkish collections meant to appear in the exhibition were left out at the last minute, allegedly because of the cost of the security demanded by the Turkish government. It is a shame, really, for Turkey not to be represented, since Turkey (not Greece) was the heartland of Byzantium, and Istanbul/Constantinople (not Athens) was its capital. One wonders if a similar exhibition could be mounted in Istanbul.

In fact, the Istanbul Archaeological Museum has come close, if we combine the wealth of two permanent galleries, “Istanbul through the Ages” and “Byzantium”, with two recent temporary exhibitions.

Kalanlar, or The Remnants, presented an overview of 12th- and 13th-century Byzantine objects from museums across Turkey. Organised by a team of Turkish Byzantinists under the direction of Ayla Ödekan, the 2007 exhibition brought together a treasure trove of artworks, most of which were unpublished and had been consigned to the storerooms of regional museums.

The period covered by the show represented the apogee and nadir of medieval Byzantium, as the vitality of the Komnenian period ended dramatically with the Latin Occupation by the Crusaders in 1204. Contacts with West and East in the 12th century, the formation of new capitals during the Byzantine exile of the 13th century, and the re-establishment of Constantinople as the capital in 1261 contributed to the formation of the rich and diverse artistic culture highlighted in the exhibition.

A second exhibition, Gün Işığında, or The Light of Day, offers an overview of the ongoing excavations for the Marmaray tunnel at Üsküdar and Yenikapı, for the Metro at Sirkeci, and for the Four Seasons Hotel in Sultanahmet. The city has never before witnessed rescue archaeology on such a scale as this – the Yenikapı site alone is more than a kilometre in length. One can only wonder at how the staff of the Istanbul Archaeological Museum found the time to mount an exhibition and write the catalogue. On all levels The Light of Day was a revelation, with artefacts spanning the history of the city, as the subtitle, 8000 Years of Istanbul, suggests. Because the excavations at Üsküdar and Yenikapı were in harbour areas, many of the discoveries represent the trade and commerce of the city through its history, with the wooden foundations of wharfs and docks, the hulls of ships (two dozen alone at Yenikapı, many sunk by a millennial tsunami), lots and lots of amphorae and the personal possessions of the sailors. The artefacts on display range from stellar artworks (classical figurines) to objects of daily use (lamps, weights, tableware), to ceramics of all periods.

One evocative piece, the inscribed wooden sole of a sandal, was displayed in a tank of water as its preservation is ongoing. Its inscription reads, “Wear it in good health, lady…”

We might wish the same to the Istanbul Archaeological Museum, for both shows speak of the current vitality of archaeology in Turkey. The Light of Day serves effectively as an interim report on major excavations still under way, and we applaud the initiative of the archaeologists in making this material accessible to the public, and particularly their willingness to share work in progress. If these shows represent the future of Turkish archaeology, we are in for some exciting times.