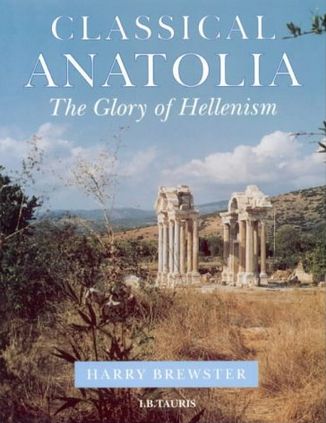 The Glory of Hellenism

Published by IB Tauris, 1993
Out of Print

The Greeks settled the western and southern coasts of Anatolia in the 11th century BC and Hellenism subsequently diffused inland with the institution of the polis, or city state, whose architecture, way of life and language were essentially Hellenic. Today, many architectural remains still exist and these are discussed and illustrated in this book. Brewster traces the history and development of civilization and building in Anatolia, interspersing the text with stories from Greek mythology.

As the author avers, Classical Anatolia is neither a guide nor a travel book, but an attempt to give an historical and visual outline of Hellenism in Anatolia by examining the remains of the Hellenistic and Graeco-Roman cities of Asia Minor. In the excellent, concise introduction, which summarises the rise and decay of the city states of Anatolia, Brewster rightly asserts that it is an over simplification to regard the spread of Hellenism solely as a result of Macedonian imperialism un Alexander the Great and his successors. The conditions prevailing in Anatolia, especially western Anatolia, were very different from those in Syria, Mesopotamia and Egypt. Hundreds of cities apparently became Hellenised without ever being occupied by Greek and Macedonian settlers.

This the author attributes to the spirit that already existed in Anatolia at the time of the Macedonian expansion. As Greek mythology so richly shows, there was no clear separation between the Greek and Anatolian worlds. The Homeric cycle abouts in Anatolian heroes. Tantalus, the son of Zeus, is a Phrygian king. Bellerophon, who kills the monster Chimaera, marries the daughter of the King of Lycia and thereby founds the royal dynasty there. Chimaera (of Hittite origin) and the Amazons, with their homeland somewhere along the Black Sea, were appropriated by Greek mythology and became symbols in Greek architecture.

As early as the fourth century BC, Isocrates reasoned that the name of Hellene was no longer indicative of race but of a mentality and a way of life, or diatta (whence we get the word ‘diet’). When Alexander the Great invaded Asia Minor, western Anatolia was already very familiar with the Greek world. In Caria (the region around modern Bodrum), where Dorian settlers from mainland Greece married indigenous Carians, the diffusion of Greek culture had already started by the fifth century BC

Under Alexander the Great’s successors, the Hellenisation of Anatolia became complete with the founding of the city state – polis – on the Greek model. Being a Greek city involved adopting the constitution, administration and cultural institutions of metropolitan cities like Athens. These institutions included the citizen body – ekklesia – and the council – boule – which together governed the city, and the twin pillars of the Greek way of life, the theatre and the gymnasium

The language of the city had to be Greek, of course. Brewster regards it as a curious phenomenon that not only the less advanced cultures in Anatolia, but also people like Lydians, Phrygians and Lycians, who possessed sophisticated culutres adopted Greek in preference to their own languages. The native tongues of Lycia and Caria had died out almost entirely by the end of the first century BC. Of course, in the rural parts of Anatolia, especially in the interior, indigenous languages lingered will into our era, In Gallatia, the region around modern Ankara, rural people spoke Gallic up to the third century AD.

The Hellenisation of Anatolia was continued and complemented under Roman rule, which was flexible and intelligent. The Romans realised that the prosperity and vitality of Anatolia depended upon the existance of these city states based on the Greek model; their institutions were left intact and no attempt was made to replace Greek with Latin. The majority of the most splendid monuments in Anatolia date from the time of the Romans, under whom monumental dynastic building was encouraged and sponsored…

The book does not overwhelm the reader with its erudition. After a brief chapter on Hellenistic and Graeco-Roman architecture are chapters devoted to particular classical regions. As well as a map of classical Anatolia, there are two useful appendices – one a list of eminent philosophers, artists, writers and orators who were native of Anatolian cities, and the other a chronological table of the Hellenistic dynasties in Asia Minor and the Middle East.