Store > Books > Enlightening Europe on Islam and the Ottomans 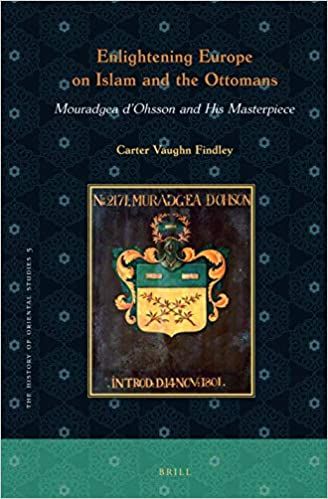 Enlightening Europe on Islam and the Ottomans

Mouradgea d’Ohsson’s Tableau Général de l’Empire Othoman is the most authoritative, magnificently illustrated work of the Enlightenment on Islam and the Ottomans. A practical reference work for kings and statesmen. The richest collection of visual documentation on the Ottomans in a hundred years with illustrations and deep insights into illustrated book production. Shaped by the author’s personal struggles, this work stands as a monument to intercultural understanding. One of the great taxonomic works of Enlightenment thought, this is a work of advocacy for reform and amity between France, Sweden and the Ottoman Empire.


Some people belong to one country. Ignace Mouradgea d’Ohsson belonged to three: the Ottoman Empire, where he was born in 1740; France, where he died in 1807; and Sweden, for which he worked for most of his life. His careers were as varied as his identities.

Son of a wealthy Armenian merchant and his French wife (Claire Pagy, of a Levantine family from Smyrna, some of whom still live there), he became a merchant, interpreter, diplomat, writer and political reformer. He was at once Armenian, Catholic (some Armenians acknowledged the authority of the Pope), Ottoman, French and Swedish. From 1763 to 1784 he was dragoman for the Swedish Legation in Istanbul under the brothers Gustaf and Ulric Celsing, who succeeded each other as minister between 1750 and 1780. Their superb collection of Istanbul views by Jan van der Steen was recently sold to a Qatar museum.

Ennobled in 1780 by Gustav III of Sweden, Mouradgea, a freemason with many “brothers”, acquired a new identity as “M le chevalier d’Ohsson”, from his uncle’s sobriquet “Tosun”, Turkish for “robust” or “bull-like”. He was one of the first, and most gifted, Istanbullus to achieve the goal of transforming into a Western European.

Driven by his exceptional energy and versatility, and the financial backing of his wealthy father-in-law, Abraham Kuleliyan, from 1784 Mouradgea worked on the Tableau général de l’Empire othoman, which Carter Findley rightly admires for its design and illustrations, as well as its abundance of accurate information. The Abbé Parent de Vassy, from the Sorbonne, was assigned to edit the text, smoothing out Mouradgea’s French prose.

His inside information reveals the history and structure of the Ottoman palace, government, army and navy, and explains the role of the ulema (religious scholars) and the many dervish orders and their relations with Christians – who were more often humiliated, by insults and clothing prohibitions, than mistreated.

The Tableau was published in Paris in three splendid illustrated volumes in 1788, 1790 and – leapfrogging the publishing desert of the Revolution and the Empire – 1820. Like Mouradgea himself, the work was helped by the triangular alliance between France, Sweden and the Ottoman Empire, which – defying differences between Catholics and Protestants, as well as Christians and Muslims – was at its height during Mouradgea’s years in Paris.

The handsome Swedish Count Axel von Fersen was the lover of Marie Antoinette. Gustav III received an annual subsidy from France, and was planning an attack on Russia with Ottoman help. The book was printed at the Imprimerie de Monsieur – “Monsieur” being LouisXVI’s pro-Ottoman, pro-Gustavian brother, the Comte de Provence, later Louis XVIII. Politics, literature, the arts and personal tastes and ambitions all reflected and reinforced the Franco-Ottoman-Swedish alliance. Gustav read the first volume, which was dedicated to him, in 1788, perhaps as he sat on his Turkish divan in Haga, his favourite Neoclassical pavilion outside Stockholm, while planning his attack on Russia.

Even the frontispiece reflected the alliance. The future French ambassador to the Ottoman Empire, the Comte de Choiseul-Gouffier, in an outburst of youthful Philhellenism, had published in 1782 the first volume of his Voyage pittoresque de la Grèce, with a frontispiece showing a figure of Greece in chains, awaiting liberation by Russia. In a deliberate riposte, Mouradgea’s frontispiece followed the official French policy of support for the Ottoman Empire. It shows the Prophet Mohammed in front of the Kaaba in Mecca, with a copy of the Koran in his hand. Islam, d’Ohsson asserted, was a rational religion with codified law, and the Empire was ready for reform under enlightened leadership. The book was shown to the young Selim III after his accession in 1789, to counteract the impact of the Voyage pittoresque de la Grèce, which the British ambassador had naturally drawn to the attention of the Ottoman authorities.

The book’s message was that the Ottoman Empire was not a lawless despotism, but a well-ordered state. It had vast resources, helped by foreign Muslims’ acceptance of the authority of the Sultan as their Caliph. It needed only “one great man, we shall not cease to repeat it, to give this empire a new face”: that man was the future Selim III, already in touch with Louis XVI, who would ascend to the throne in 1789.

The book was distinguished by the quality and abundance of its illustrations, all of which are reproduced here by Findley. They were mostly composed by two French artists, Nicolas de L’Espinasse and Jean-Baptiste Hilaire, from drawings by the Ottoman artist Konstantin Kapıdağlı that were supplied by Mouradgea. They were engraved in Paris, initially under the supervision of Charles-Nicolas Cochin, with the inscription apdr, “avec privilège du roi”. They reflect the vitality of the unfamiliar world of Ottoman painters. Far from following a Muslim prohibition on paintings, wealthy pilgrims to Mecca often took painters with them to record the Holy Places. Sultans regularly had their portraits painted, as Selim III did by Kapıdağlı. Western view-painters living in Istanbul included Antoine van der Steen, who worked for the Swedish ambassador before 1780, and Luigi Mayer, who worked for the British ambassador before 1793.

The plates commissioned by Mouradgea provide what Findley calls “uniquely valuable pictorial evidence” of Ottoman parades and ceremonies; officials and their costumes; Muslim women, veiled and unveiled; the different costumes of Albanians, Greeks, Bosnians; Greek dances; Dervish exercises; Muslim prayers, mosques and calendars; and the relics of the Prophet in Topkapı Palace. He also shows the grand vizier’s tribunal at work in the divanhane

in the Topkapı and scribes working in the Sublime Porte. Only an insider/outsider like Mouradgea could have commissioned such a collection and have them engraved in Paris. There are even intimate details of harem life – back in Istanbul, his family had financial relations with the Chief Black Eunuch, who was in charge of the Harem. One print shows the ritual of the Sultan having a bath, helped by numerous female attendants; another shows a European envoy lunching with the grand vizier in the imperial divan.

Mouradgea, in addition to his other careers, was also a political reformer. Posted as a Swedish diplomat to Istanbul in 1792–99, he wrote memoranda for the Sultan and helped found the Ottoman Academy of Military Engineering. However, Selim III requested Mouradgea’s recall, as he believed he had become “completely inclined towards the French” and a Republican, and the French Republic had invaded the wealthy Ottoman province of Egypt. He lived off a small Swedish pension outside Paris with his second French wife, born Amélie Belliard de Vaubicourt, until his death in 1807. His son Constantine, a Swedish diplomat, arranged the publication of the third volume in 1820 (perhaps with help from Louis XVIII, to whom the artist Antoine Ignace Melling had just dedicated his superb Voyage pittoresque de Constantinople in 1819).

Findley has produced a fascinating, definitive study, important for the histories of diplomacy and book production as well as Ottoman studies, and a fitting sequel to his books Ottoman Civil Officialdom: A Social History (1989) and The Turks in World History (2005). The difficulties of finding first-hand information on such an elusive, multifarious and peripatetic man as Mouradgea are suggested by the amount of research Findley has conducted in archives in Istanbul, Venice, Paris, Nantes and Sweden. Long quotations from Mouradgea’s text are accompanied by hundreds of reproductions of the prints in his book.

Mouradgea’s life and books (there was also a history of the Ottoman dynasty) show that alliances, translation and tolerance were no less characteristic of Ottoman-European relations than conflict and ignorance. Hopefully, one day both the Qatari owners of the Celsing collection of pictures (now, shamefully, hidden from public view) and Mouradgea’s Swedish descendants, who still own some of the pictures he commissioned, will allow them to be exhibited. No one who sees these pictures, or reads this book, could dispute that the Ottoman Empire, however different in government, language and faith, was artistically, commercially and above all diplomatically closely linked to Europe. Ottoman history is also European history