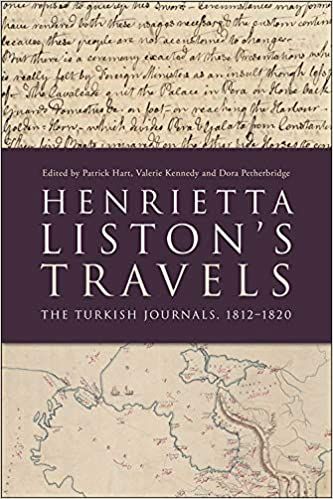 An original perspective on the early nineteenth-century Mediterranean and Ottoman Empire, Henrietta Liston’s Turkish journal is a significant yet virtually unknown work of womens travel writing. As the wife of the British Ambassador to the Sublime Porte, Liston had privileged access to the Ottoman elite and diplomatic corps. Her journal reflects on BritishOttoman relations, combining Orientalist perspectives with a human-centred version of the picturesque. It offers astute commentaries on places, people and events  including a plague-ridden Constantinople, the harem of the Grand Viziers deputy, the presentation of ambassadors in the Seraglio, and the departure of pilgrims on the hajj.

Key features: ~ the first publication of Henrietta Liston’s Turkish journal and associated writings ~ a modernised, accessible yet scholarly edition of Liston’s travel writing with supporting critical apparatus ~ coupled with comprehensive online resources, including a complete set of digital images and transcriptions of the manuscripts, and essays on Liston’s journals by scholars, novelists and travel writers ~ based on archival research in the Liston Papers that sheds new light on the period, the Listonslife in Turkey and their circle of diplomats, travellers and writers ~ an important contribution to the recuperation of unpublished women’s travelogues and life writing, and to the study of diplomatic spouses and consorts.

‘Edited by an international team of experts, this is an exciting addition to oriental travelogues by British women. From the diplomatic salons and ceremonies of Constantinople to the villages and gardens along the Bosphorus, Listons fascinating accounts powerfully evoke a world long gone.’ Gerald Maclean, University of Exeter

‘Captures readers from its opening sentence, as if it were a novel. This meticulously edited, highly readable and thoughtfully modernised edition is a valuable and compelling addition to the emergent canon of writings by British women who travelled to the Ottoman empire.’ Donna Landry, University of Kent