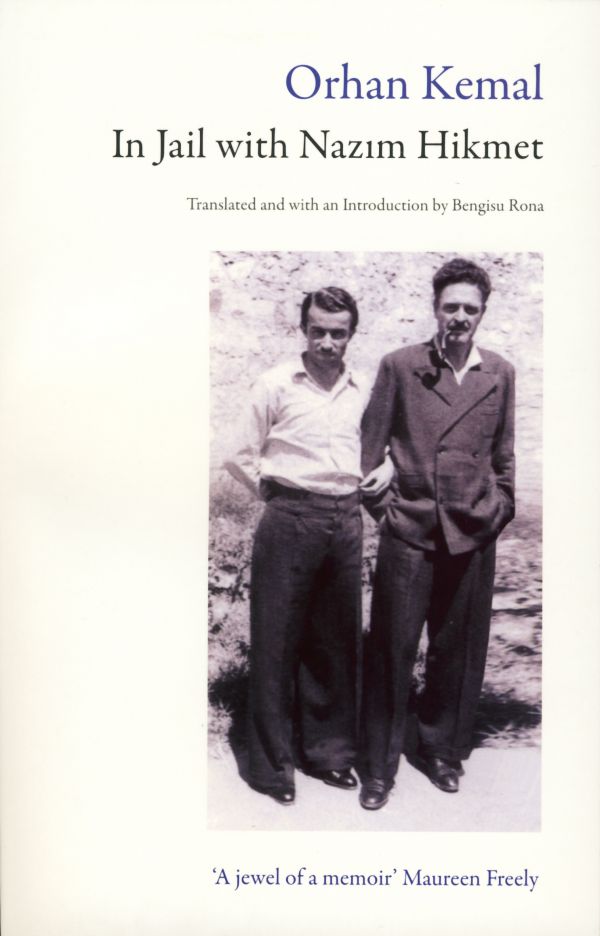 In Jail with Nazim Hikmet

By Orhan Kemal and Bengisu Rona
Published by Saqi Books
£8.50

‘A jewel of a memoir’
Maureen Freely

Bursa prison, mid-winter 1940. Two prisoners meet, both writers, both serving long sentences for allegedly inciting Turkish soldiers to mutiny. One is Turkey’s famous poet Nazım Hikmet. The other is a young aspiring poet, Orhan Kemal, who now finds himself sharing a cell with the man whose work he has long admired.

Lessons in living in hope

Kemal went on to become one of Turkey’s most popular novelists, justly celebrated for his ability to get under the skin of ordinary life. In an early book, recently (and crisply) translated and annotated by Bengisu Rona, he describes how he acquired the confidence to write. It turns out he shared his cell in a Bursa jail with the great man of Turkish letters, the poet Nazım Hikmet. The book is a pamphlet-sized version of Alexander Solzhenitsyn’s The First Circle – an account of a privileged corner of hell.

Hikmet spent long years inside on the trumped-up charge of inciting mutiny, and moved through prison like a respected elder statesman. He busied himself with tasks, building wooden boxes or weaving cloth to support his family on the outside, but he also undertook the job of educating Kemal. He stood over the young man as he learned his French verbs and gently steered him away from writing indifferent poetry into writing great prose. Kemal worships Hikmet not by putting him on a pedestal but by recounting his foibles. There is a brief but extraordinarily moving passage when Hikmet, for reasons that are both petty and sad, refuses to see his wife. She had come to visit but disregarded his advice not to stay in a particular hotel. He has to be coaxed by the entire jail to abandon his wounded pride.

Just as the inmates fed themselves from the scraps they could afford, the poet managed to conjure up a life worth living from within prison walls. Many of the characters he sketched with charcoal and oils in jail he also portrayed in his poetry. “How strange it is, there are many people I love whose faces I have not seen, whose voices I have not yet heard,” he writes to Kemal after his friend’s release. In that same correspondence, he chides Kemal for giving in to despair. Great artists write about hopelessness without succumbing to it, he says. “A doctor who believes a man’s fight against disease is in vain has no right to practise as a doctor,” he says.

Another of Orhan Kemal’s books, The Idle Years, has also been translated and contains an introduction by the “other” Orhan, explaining its extraordinary appeal. It derives, Orhan Pamuk writes, from a delight in the intimacy of everyday life and the genuine optimism of those who by rights should be given to despair. Humanity without sentimentality is a skill Orhan Kemal learned from the very best.