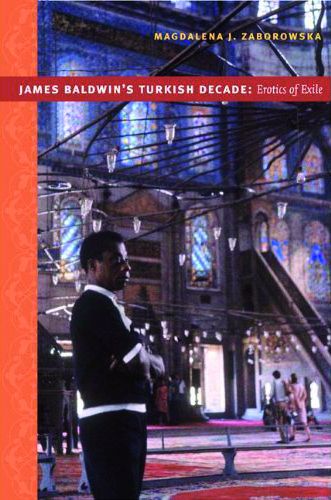 As James Baldwin regains his rightful place among the giants of American literature, a new eye is being cast upon the importance of his often ignored later works. A Pentecostal preacher turned writer turned civil-rights activist, James Baldwin loudly challenged (and still challenges) established notions of race and sexuality.

Unable to live in a country where he was ostracised for these positions, Baldwin would spend the majority of his life in self-imposed exile in France, Switzerland and Turkey.

Magdalena Zaborowska’s Erotics of Exile offers a meticulous account and analysis of Baldwin’s years in Turkey and their previously unexplored effects on his work. Combining personal anecdotes and excerpts from Baldwin’s work, Zaborowska deftly captures the essence of the man, and its inextricable link to the characters and themes in his writings.

The narrative begins with Baldwin’s acceptance of the invitation of his close friend, the Turkish actor Engin Cezzar, to stay and write, undisturbed, in Istanbul. Though he had laboured over Another Country, his third novel, for almost 10 years, upon arrival in Istanbul Baldwin was able to complete it in a mere two months. Surrounded by a colourful cast of Istanbullus, we travel alongside his emotionally tumultuous life as he directs Herbert’s Fortune and Men’s Eyes for the Turkish stage, completes the essay collection No Name in the Street and begins his final work, The Welcome Table. Despite his lack of Turkish and frequent references to him as the Arap, Baldwin felt comfortable in the simultaneous celebrity and anonymity Istanbul allowed him, while the clarity afforded by distance allowed him to gain insight into his homeland.

Although attention to detail is one of the text’s strengths, Zaborowska’s tendency to overanalyse the comments of her interviewees can become tiring. Nevertheless, this detracts little from an otherwise successful book, delightfully peppered with previously unpublished photographs, which, like the anecdotes to which they correspond, act as a spyglass through which to observe Baldwin.

The text’s importance to both Baldwin studies and American literature notwithstanding, its greater significance lies in its exploration of national and supranational identity. In his own words, exile “saved my life… [by making me] able and willing to accept [my] own vision of the world, no matter how radically this vision departs from that of others.” Words that should resonate with all expatriates, regardless of origin or destination.