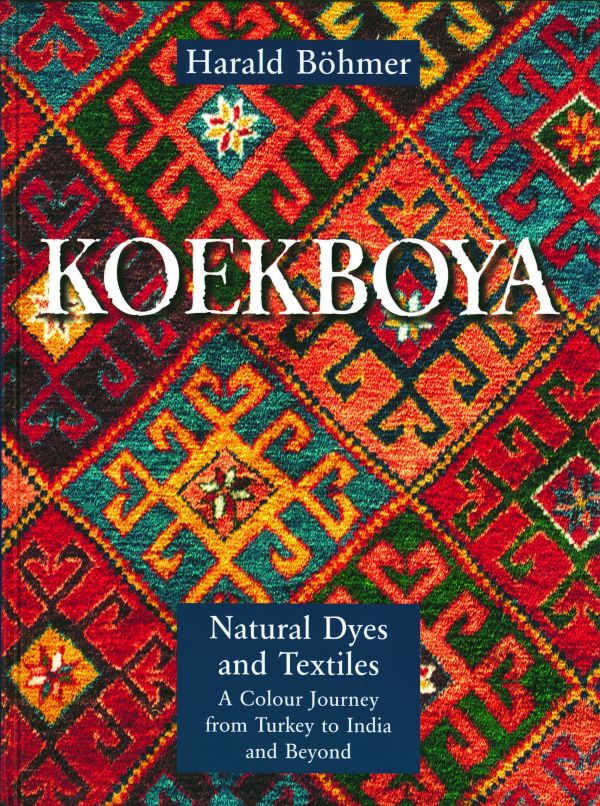 Natural Dyes and Textiles. A Colour Journey from Turkey to India and Beyond

Out of print. Only 1 copy left

Koekboya is a Turkish word. Literally translated, it means root-dye. It is used in Turkey for all kinds of natural dyes, whether they are actually made from roots or rather from flowers, leaves, tubers, or seeds. Even insect dyes are included in the Turkish expression Koekboya.

In this book, almost 100 dye plants from Turkey and around the world are introduced on a scientific basis: their botany, their qualities for dyeing, their cultural and historical importance, and - in light of the world-wide Renaissance of natural dyeing - aspects concerning their reintroduction for professional use or as a hobby.

Tested dye instructions ease access to their practical use. In addition, there are special chapters on the various dyeing techniques, on dye insects, indigo and Tyrian Purple, as well as on textiles’ fibres; from wool and cotton to wild silk, hemp and rafia. The basic textile techniques and the related equipment are briefly described and illustrated with drawings and photographs, and the various possibilities for decorating textiles with natural dyes are presented.

An introductory chapter on colour provides a scientific background, leading then to questions and perception about colour psychology and colour aesthetics. Ecological problems and those of globalisation, as well as the multiplicity in the world of textiles, are also touched.

300 pages, 500 colour illustrations, numerous drawings, graphs and maps lead the reader into the great and fascinating realm of Natural Dyes and Textiles.

All of us who study, collect and appreciate the Anatolian carpet-weaving tradition have for two decades already owed an enormous debt to Harald Böhmer’s labour of love. Koekboya distils in one useful, attractive volume the essence of these labours. Part detective narrative, part encyclopedia, part history, bursting with colour and fascinating detail, the volume is a modern classic, a virtuoso blending of art, science and ethnography, a magnificent gift from Dr Böhmer to us all. Walter B Denny, Cornucopia

A Labour of Love

By Walter B Denny

After almost a century in which industrial dyes often blighted carpet production, today traditionally dyed carpets are woven in many parts of the Islamic world. Böhmer’s mission to revive traditional dyeing has led in turn to more sophisticated tastes and a new appreciation of contemporary carpets using traditional colours.

Decades of experimentation with traditional dyestuffs and mordants led to the rediscovery of most of the traditional dyes used in Anatolian rugs over the centuries, together with many ancient trade secrets. By using a wide range of mordants with madder root – the cornerstone of traditional wool-dyeing and the kök (root) of the book’s title – Böhmer was able to create many different reds, as well as the famous Anatolian aubergine purple. His account of these discoveries is one of the most fascinating parts of Koekboya.

Another important facet of his work has been the analysis of colours in historic Anatolian carpets and textiles. Using paper chromatography, Böhmer has analysed textiles as diverse as the fifth-century bc Pazyryk carpet in St Petersburg (whose red was produced from Polish rather than Armenian kermes beetles) and Ottoman silks of the sixteenth century.

Böhmer is generous about sharing his findings with other scientists and sharing any credit with his associates. Working with a government-sponsored weaving co-operative and a Turkish state university, he insisted that the artist of each carpet affix her own name to the finished work. A leading figure in the carpet world once referred to him as “the pope of natural dyes”. A better label might be “the St Francis of traditional carpet-weaving”, given his modesty, his personal austerity and his devotion to the idea that better carpets mean better art and a better life for the artists.

This extraordinary volume, the fruit of many years of fieldwork and laboratory analysis, has a total of over 500 illustrations, almost all in colour, from botanical photographs and chemical diagrams to illustrations of the weaving process and finished carpets. It also deals with broader issues of textile design and ornamentation, weaving structures, and technologies for applying designs to finished woven textiles, whether embroidery, tie-dyeing, batik or silkscreen printing.

There is plenty to delight casual readers and lovers of Turkish carpets, as well as those with more specialised knowledge. The book covers the spectrum (literally and figuratively) of dyes and their sources, animal, vegetable or mineral.

Böhmer gives detailed recipes for those who might wish to undertake dyeing themselves. He condenses forty years of patient, passionate work in Turkey into essays on the relationship of traditional dyeing to the environment, to aesthetics, to the preservation of culture. For chemists, the book includes a scientific appendix, and for practical dyers a list of supply sources. Those curious about the Dobag carpet-weaving project that Böhmer was instrumental in initiating will find here a short history of the project. There is a rich bibliography for those who wish to pursue the book’s subjects in greater depth. The illustrations provide a feast for the intellect. Fogelberg’s English translation does justice to both author and reader.

All of us who study, collect and appreciate the Anatolian carpet-weaving tradition have for two decades already owed an enormous debt to Harald Böhmer’s labour of love. Koekboya distils in one useful, attractive volume the essence of these labours. Part detective narrative, part encyclopedia, part history, bursting with colour and fascinating detail, the volume is a modern classic, a virtuoso blending of art, science and ethnography, a magnificent gift from Dr Böhmer to us all.