Store > Books > Of Strangers and Bees 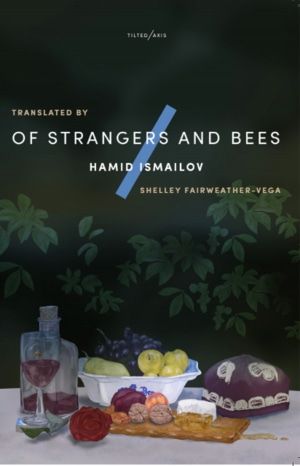 Of Strangers and Bees

‘‘Learned, strange and charming, Of Strangers and Bees enriched my understanding of history.’’
Marcel Theroux, The Guardian (Book of the Day)

The intricate new novel from the winner of the EBRD Literature Prize 2019.

‘Life in exile! May it be cursed. Once you have become a stranger, a stranger you shall remain; you may endeavour to make friends, but the task is a difficult one, full end to end with uncertainty.‘

In the latest thrilling multi-stranded epic from the award-winning author of The Devils’ Dance, an Uzbek writer in exile traces the fate of the medieval polymath Avicenna, who shaped Islamic thought and science for centuries.

Waking from a portentous dream, Uzbek writer Sheikhov is convinced that the medieval polymath Avicenna lives on, condemned to roam the world. The novel follows Avicenna in various incarnations across the ages from Ottoman Turkey to medieval Germany and Renaissance Italy. Sheikhov plies the same route, though his troubles are distinctly modern as he endures the petty humiliations of exile.

Following the award-winning The Devils’ Dance, Hamid Ismailov has crafted another masterpiece, combining traditional oral storytelling with contemporary global fiction to create a modern Sufi parable about the search for truth and wisdom.

Variations on a theme of exile

The title of Hamid Ismailov’s new book, Of Strangers and Bees, offers a clue to both the life and mind of the author and the central theme of exile that permeates this curious work of translated fiction.

Ismailov is a unique figure in world literature. Born into a traditional Uzbek family in Tokmok, modern-day Kyrgyzstan, for more than 20 years he worked at the BBC World Service in London, where he has lived since 1994 having been forced to leave Uzbekistan for what the state called “unacceptable democratic tendencies”. Still silenced in his home country, several of his Russian-language novels have been published in English, including The Railway and The Underground. Last year The Devils’ Dance, the first of his Uzbek novels to appear in English, won the EBRD literature prize. This was especially significant given that only a handful of Uzbek books have ever been translated into the English language.

Of Strangers and Bees is a fantastical book shared by a trio of main characters. There is the impoverished Uzbek writer in exile, Sheikhov, who spends time in cities such as Paris and Bamberg, earning a meagre wage translating texts for a living. While overseas, he spends time missing his daughter and worrying about visas whilst becoming increasingly distracted and removed from his main goal, which is tracing the life of the 10th-century Islamic philosopher and polymath Abu Ali al-Husayn ibn Sina, or Avicenna, born in the Bukhara region of Uzbekistan. Yet, Sheikhov is not simply delving into Avicenna’s past: he believes that the great thinker is somehow living on today, in the modern age, amongst us. Despite his struggles Sheikhov is a gentle soul, who shares his pensive thoughts on otherness and society, sometimes chest-crushingly so: “It turns out kindness remains kindness, and does not choose nationalities.”

Sina, another character, is not human at all but rather a wise honeybee banished from his hive. Humans have long had a special relationship with bees. In ancient Egyptian mythology bees were believed to be born from the tears of the sun god Ra, while the Koran includes passages about the healing power of honey and the teamwork of bees, intended to set an example for mankind on the value of working together. Sina intuitively understands the importance of togetherness and community, necessary attributes for happy hive living, for making honey and for natural migration: “The pleasure one receives in solitary flight seemed to him only a pale shadow when compared to this group voyage.” Sina’s message overall seems to be one of tolerance.

Then there is the Stranger, who is catapulted to various medieval cities. In Florence he ponders Botticelli, singling out one painting in particular, The Outcast. He also visits Istanbul during the Tulip era, admiring Topkapı Palace and musing on Janissaries, dervishes and the poet Nadim. He particularly enjoys the sleep-inducing glories of a warm hamam during a windy Istanbul winter: “Then the steam rose and warmed his flesh straight through to his bones, and it softened his whole body… and there, wrapped in a blanket, he slept like the dead.” But who is the hamam-loving Stranger? Is he Avicenna himself, wandering in the world, or is he the workings of Sheikhov’s mind, his daydreams and fantasies? Exile – and its associated feelings of transience, longing, hope and fear – connects all three characters.

Shiekhov, like Ismailov, knows that the culture of his homeland, Uzbekistan, remains concealed within the world, a “distant legend”. Even those who claim to know usually come up short, as Sheikhov finds out in Paris: “By complete chance you encounter a particular professor, for example, and are surprised to learn he has been interested in Uzbekistan for a long time – that is to say, he is an amateur collector of traditional long-necked pitchers.”

Yet, positioning Uzbekistan, and wider Central Asia, as a place apart in the world, somewhere too exotic, too unknowable, is a tired trope. Ismailov masterfully addresses this by having his characters approach the world from an unapologetically Uzbek perspective, and in doing so positions the Western reader as the “stranger”. The years in the book are based on the Hijri calendar. Uzbek singers, barely known to the outside world, such as Munajat Yulchiyeva, are namechecked, as is the Turkic Sufi poet Hoja Ahmad Yassavi, and likewise, it is up to the reader to acquaint themselves with the legend surrounding empire-builder Tamerlane’s wife Bibi Khanum and her amorous architect. Few clues are handed out.

This brave whirlpool of new ideas presents valuable references and standpoints for the reader to get along with, a thrilling starting point for wider research and further reading. And the reason this challenging, boundary-pushing style works so well is because the reader, despite disorientation – the very feeling of exile – emotionally connects with all three of the characters, all of the time, a rare accomplishment in any piece of fiction, and the highlight of this singular book.