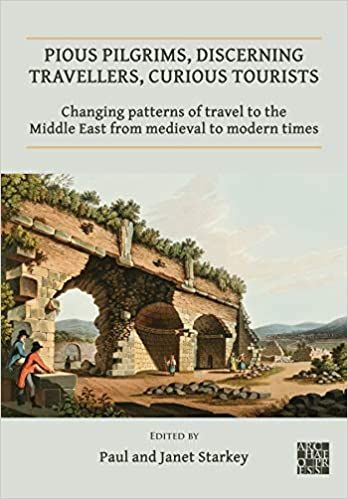 Edited by Paul and Janet Starkey

Pious Pilgrims, Discerning Travellers, Curious Tourists: Changing patterns of travel to the Middle East from medieval to modern times comprises a varied collection of seventeen papers presented at the biennial conference of the Association for the Study of Travel in Egypt and the Near East (ASTENE) held in York in July 2019, which together will provide the reader with a fascinating introduction to travel in and to the Middle East over more than a thousand years.

As in previous ASTENE volumes, the material presented ranges widely, from Ancient Egyptian sites through medieval pilgrims to tourists and other travellers of the nineteenth and early twentieth centuries. The papers embody a number of different traditions, including not only actual but also fictional travel experiences, as well as pilgrimage or missionary narratives reflecting quests for spiritual wisdom as well as geographical knowledge. They also reflect the shifting political and cultural relations between Europe and the Near and Middle East, and between the different religions of the area, as seen and described by travellers both from within and from outside the region over the centuries. The men and women travellers discussed travelled for a wide variety of reasons religious, commercial, military, diplomatic, or sometimes even just for a holiday! but whatever their primary motivations, they were almost always also inspired by a sense of curiosity about peoples and places less familiar than their own. By recording their experiences, whether in words or in art, they have greatly contributed to our understanding of what has shaped the world we live in. As Ibn Battuta, one of the greatest of medieval Arab travellers, wrote: Travelling it leaves you speechless, then turns you into a storyteller!