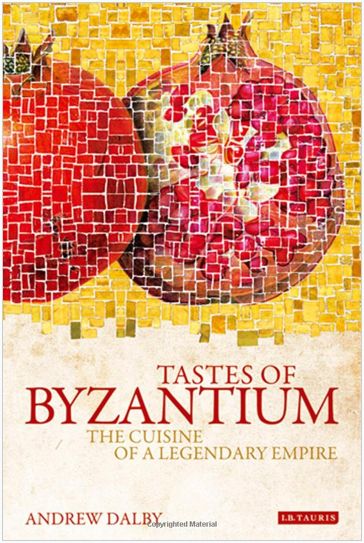 The Cuisine of a Legendary Empire

For centuries, the food and culinary delights of the Byzantine empire - centred on Constantinople - have captivated the west, although it appeared that very little information had been passed down to us. Andrew Dalby’s Tastes of Byzantium now reveals in astonishing detail, for the first time, what was eaten in the court of the Eastern Roman Empire - and how it was cooked. Fusing the spices of the Romans with the seafood and simple local food of the Aegean and Greek world, the cuisine of the Byzantines was unique and a precursor to much of the food of modern Turkey and Greece. Bringing this vanished cuisine to life in vivid and sensual detail, Dalby describes the sights and smells of Constantinople and its marketplaces, relates travellers’ tales and paints a comprehensive picture of the recipes and customs of the empire and their relationship to health and the seasons, love and medicine.

For food-lovers and historians alike, Tastes of Byzantium is both essential and riveting - an extraordinary illumination of everyday life in the Byzantine world.

The Taste of Byzantium

We know a lot about ancient Roman food, thanks to the second-century cookbook of Apicius. We have long had a pretty good picture of how the Greeks ate from Athenaeus’s fascinating hodgepodge of dinner-table chat, the Deipnosophists. A few years ago Andrew Dalby added much to our knowledge about ancient Greek cuisine in Siren Feasts (Routledge, 1996) and was even able to present persuasive modern renderings of some ancient recipes in The Classical Cookbook (with Sally Grainger, Getty Museum, 1996).

The great gaping hole in the picture has been Byzantine cuisine, and Dalby fills it, about as well as it can be filled, in Flavours of Byzantium. Unfortunately, as he notes, the Byzantines had no Apicius or Athenaeus. We have to glean what we can from market regulations, travellers’ writings, historical asides, monastic rules and a few short texts on diet, all of which are by nature something less than recipes.

He does have a chapter on “Recipes and Instructions”, in which he manfully gathers everything that might show specific Byzantine foods in their concreteness. These include one recipe from Apicius (lucanica, a sausage that has living descendants), four from a dietary manual that a homesick Byzantine doctor wrote for the Frankish king he served, two for laxative preparations of fenugreek, detailed instructions on making the ancient fish sauce garos, a modern recipe for dried meat that continues Byzantine tradition, some advice on making bread, a supposed ancestor of tarhana (which looks to me more like instructions for removing the husk of emmer wheat by alternately soaking it in water and drying it), five recipes for curing olives and a dozen for spiced wine.

The recipes seem all too simple (except for the wines!). But then there’s a detailed description of an extravagant dish called monokythron (‘one-pot’), and it truly deserves to be called Byzantine - cabbage, five kinds of fish, fourteen eggs, three kinds of cheese, olive oil, pepper, garlic and sweet wine. It comes from the Prodromic Poems, which Dalby declares present a genuine, if highly coloured, picture of Byzantine life.

So it must be said that this is not much of a cookbook. But it is a fascinating read, with its descriptions of the glittering centre of an empire. Along with his portrait of Byzantines feasting on spiced wine and sugary sweets (spoonfuls of jam served to guests with a glass of iced water and/or a cup of coffee, allowed even on the innumerable fast days), Dalby includes many colourful observations. For instance, Constantinople’s perfumers and spice merchants were instructed to set up shop where their aromas might waft upwards to the icon of Christ above the Bronze Arcade “and at the same time fill the vestibule of the Royal Palace”.

Some anecdotes have clearly been included not because they cast much light on food but because Dalby couldn’t resist them. For instance, during the savage winter of 763 the Black Sea froze 30 cubits deep for 100 miles out from the north shore, and icebergs floated down the Bosphorus, one crashing into the city walls and shaking them. There is even a picture.

Byzantine cuisine, with its lavish use of spices and honey, was clearly unlike modern Turkish cuisine, though it contributed to it, most notably in the case of fish. In central Asia, the nomadic Turks had rarely eaten fish - or rarely admitted it if they did. A herdsman’s wealth is his flocks, and to be reduced to eating fish showed extreme poverty; bal›kç› (fisherman) was a stinging taunt.

But the Byzantines, living on the fish-rich Bosphorus, were proverbial piscivores. In a satirical squib entitled Timarion, a newcomer to Hades is accosted by a resident who wants news of how it goes among the living: “How many mackerel do you get for an obol? Bonitos? Tunnies? Picarels? What’s the price of oil? Wheat and all the rest of it? And I forgot the most important thing: how’s the whitebait catch?”

And of course this is still true. Turkish is full of Greek-derived names for fishes, and your real Istanbullu is still a fish-eater at heart. Years ago I used to take a young Turkish woman with me when I reviewed restaurants in Los Angeles. Dutifully she would study every menu; with the best will in the world she would weigh the options before her then, inevitably, she’d order the bouillabaisse. She was a true daughter of Byzantium.

This review is for ‘Flavours of Byzantium’ by Andrew Dalby, first published in hardcover by Prospect Books, 2001