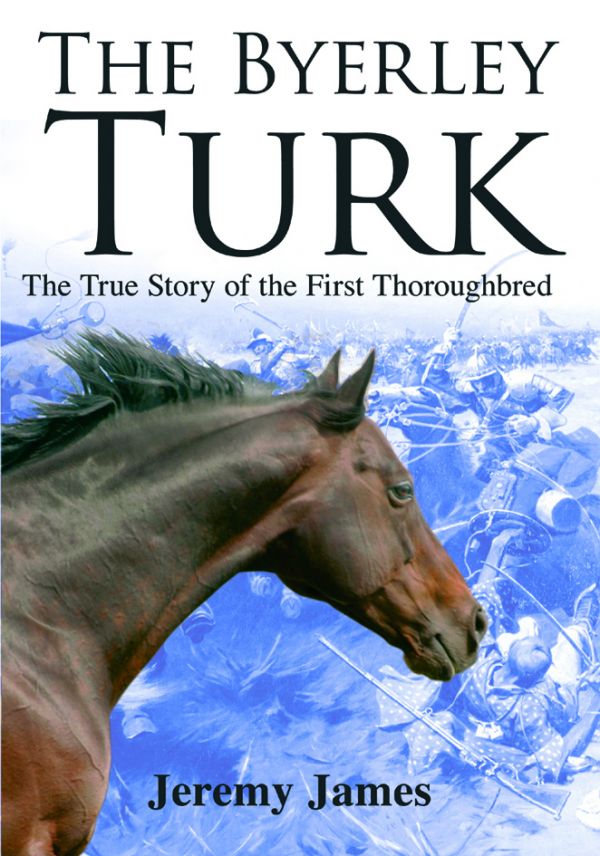 The Story of the First Thoroughbred

‘This is history fast-forwarded from a vantage point framed by a thoroughbred horse’s alert, delicately attentive ears. ’
Donna Landry

History from the horse’s mouth

Between 1650 and 1750 more than 200 ‘Oriental’ horses were imported into Britain from the Ottoman Empire and North Africa. From the resulting fusion of formerly separate Eastern strains or “races” – Turks, Arabians and Barbs – crossed with native racing stock (itself the product of Eastern influences by way of Italy and Spain) the Thoroughbred was invented. Within a single generation, these foreign horses had been naturalised and could serve as icons of Englishness.

Eastern blood horses and their progeny were objects of great beauty that also proved to be of utilitarian value. They were sentient beings possessed of powers of speed, endurance and uncanny intelligence with which Europeans were unfamiliar. These horses demanded to be treated differently from other horses, and they revolutionised not only equestrian culture but culture in a broader sense.

The English equine portrait was invented to capture their peculiar status: mere brutes, but also noble creatures. Although there had been Persian, Ottoman, and

Italian precedents, the horse portrait became a popular craze for the first time in the British Isles. These animals became like second selves for the Britons who imported, kept and bred from them.

The Byerley Turk is one of the legendary three “foundation sires” whose blood still runs in the veins of today’s racing stock. Jeremy James has done his best to ferret out archival and oral-historical evidence of the Byerley Turk’s story. That he was an Ottoman charger, imported after the siege of Buda, and that Robert Byerley rode him to great effect at the Battle of the Boyne during William III’s Irish campaign, can be documented.

But beyond these stark lineaments, how are we to understand the extraordinary difference – both genetic and cultural - represented by this Turk and others like him? James has taken the risk of writing not a history but an historical fiction. He has tried to work from the ‘facts’, in so far as they can be determined at this distance. But he has also put himself imaginatively into the mindset of the Turkic horsemen who produced equine greatness for the Ottomans (and, before their conquest by the Ottomans in 1517, the Mamelukes), bearing the equestrian culture of the Central Asian steppe even into the Balkan territories of the Ottoman Empire.

This is a work of creative reconstruction. From its fast-paced, intensely visual pages emerges a lost Ottoman world, in which is conjured up the culture of the bowman who could place three arrows into his horse’s last three hoofprints. Such horsemen bred spirited, sensitive horses and lived intimately with them, respecting their intelligence in ways then unimaginable in Europe. As a result, they achieved feats of horsemanship, including military victories, which were the envy of the world. As the Habsburg ambassador Ogier de Busbecq observed, where Europeans employed the cudgel, Ottoman grooms inspired loyal obedience in their horses by showing them ‘great lenity’.

James is to be congratulated on making this early modern difference between East and West in attitudes towards horsekeeping and the animal world dramatically convincing. A long-distance rider himself, he admits to learning from the horses who have borne with him during extraordinary adventures.

The book is dedicated to Ahmed Pasha, a tough equine customer, and his companion on the road in Anatolia. Some of the best passages are those describing the experience of long-distance travel on horseback. ‘On horseback distance is the horizon, measured in time,’ we learn. And: ‘Every dimple in the ground, every hollow, every rut is noticed as the horseman passes by.’ That when travelling a thousand miles with a horse, one must trust the horse, give him a free head: ‘You can toss away your map, hurl away your astrolabe and you will invariably arrive at your goal. Trust the horse. The horse leads. The horse loves to see what lies round the next corner, he loves to see over the next brow, the next hill.’

Much of the story is told from the point of view of the Ottoman groom who bred and reared the Byerley Turk, accompanied him all the way to Yorkshire - and then, once Robert Byerley had learnt sufficiently from the Other to take up the reins without offending his fiery charge, disappeared, perhaps back to Istanbul. Stories are still told in Yorkshire of the Turkish groom who planted walnut trees in the paddock at Middridge Grange.

The tale unfolds cinematically and would make a jolly good film. Given the extent of James’s research in obscure archives, it is remarkable how he manages to keep the action forward-going. The book is undoubtedly a hybrid – historical ‘faction’ - and although it may not satisfy scholars, it will nevertheless grip most readers with its pace and evocativeness. This is history fast-forwarded from a vantage point framed by a thoroughbred horse’s alert, delicately attentive ears.