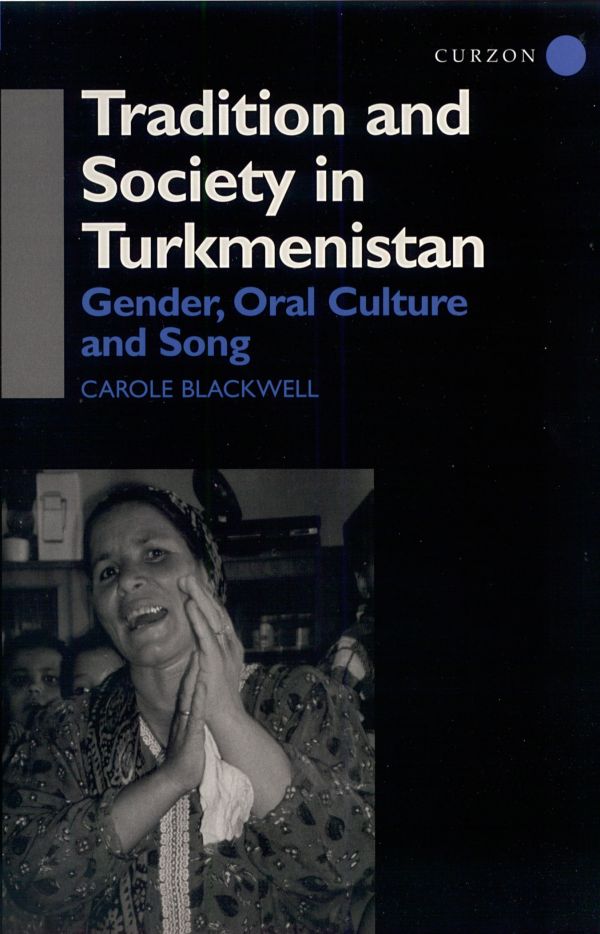 By Carole Blackwell
Published by Curzon

This unusual and refreshing book conjures up a vision of a paradise where young girls are brought up to be submissive to their husbands, to be silent in front of their in-laws and to put the welfare of their new families before all else. The young would no more dream of arranging their own marriages than they would dream of eating a cat, the author is told by her Turkmen friends, who seem to have forgotten their ancestors’ habit of riding over to the other side of the mountain on great alaman horses to reive Persian girls, who were thought to be even more beautiful than their own.

When her husband was posted to a UN project in Ashgabad, the author, an American folklorist, found herself pitched into a Turkmen community where she spoke not one word of the language and knew nothing of the history or culture. This book tells the rather touching story of her encounters with Turkmen women, who open their hearts to her and teach her their songs. In line with the UN and NGO culture of “gender issues”, men do not figure in her narrative.

The Turkmen found the author as extraordinary as she found them. To the Venus-like Turkmen women, the American aid worker was undoubtedly from Mars. And yet, Blackwell has not only produced some intimate insights into Turkmen family life unknown to outsiders, she has told the world things about the thoughts of Turkmen women of which even their menfolk had no idea.

Turkmen daughters are regarded as transient guests in the family, to be married off as soon as they are of age. The first ones to be born are named after flowers, the moon or pearls but, if there is still no son after three girls, the next one will be named Ogulgerek (A son is needed), or Ogulsabõr (Patience for a son). Girls do not resent these names ­ quite the contrary, for they need brothers to protect them. The author seems to be astonished at how useful Turkmen girls are: not only do they bake bread and milk camels, but they weave the finest carpets. American girls work out.

In a linguistic tour de force Blackwell has transcribed 350 traditional Turkmen women’s two-couplet songs that she found in the Ashgabad library, and, with the help of Yousef Azemoun, who some years ago published an English version of the poems of the Turkmen Makhtum Goli (reviewed in Cornucopia 11), has translated them into English and provided explanations of them. The songs cover hopes and fears about marriage, divination of the future, lullabies and laments. In a culture where women do not speak in front of their elders and where emotions are of no concern to the family weal, a great wealth of feeling is condensed into these little songs of emotional release.

The early chapters set out to describe contemporary life in Turkmenistan, but in a country where the Ministry of Culture decrees that the purpose of culture is to eulogise the President, circumspection was clearly called for. Nevertheless, the author makes a good job of it. Interestingly, she has very little to say about Islam in Turkmenistan, beyond pointing out that, although there is a quiet revival after the years of suppression under the Soviets, most Turkmen prefer to pray at home than go to one of the glitzy new mosques. The Turkmen in Iran are heavily influenced by the Nakshibendi order of dervishes. It would have been interesting to know if their influence persists north of the Kopet Dagi. She also points out the survival of many pre-Islamic shamanistic practices. A beaver for detail, she gives the Turkmen names for plants used to avert the evil eye, but not the English. Yüzerlik is wild rue, but what are dagdan and ylgyn?

Quite apart from the folkloric interest, this book charmingly evokes a society not yet fragmented by the idea of the nuclear family, where the overriding imperatives are duty, respect and hospitality to the stranger. The tensions created by exposure to new ideas in the city are just hinted at. If you are jaded by modern women, dip into this book for a glimpse of a better-ordered world.