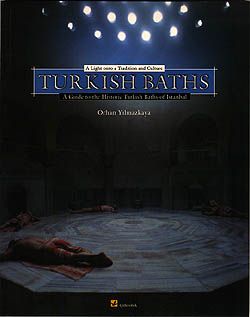 A Guide to the Historic Baths of Istanbul

It’s good to be clean. You can shower quickly and efficiently. You can relax in a hot bath, feel the water grow cold and watch it dissolve your dirt and lose its crystal clarity around you. You can even, like the Japanese, do both; wash yourself under a shower first, so that your bath water stays clean. You can endure a sauna until your pores open and your lungs catch fire. But there is only one setting where the process of washing is elevated to an art form, a performance, a ritual. Only in a hamam is the process as important as the result, and only after a hamam is the sense of cleanliness so complete, seemingly penetrating through the skin to the inner man. The phrase “cleanliness is next to godliness” takes on a new, sybaritic meaning.

For a long time I have waited for a book that would do justice to the unique pleasure of the ritual of the Turkish bath, to the austere beauty of hamam architecture, and to the history of the hamam as a social institution. I was therefore delighted to hear of the publication of Turkish Baths, by Orhan Yilmazkaya. Disappointment followed. Awkwardly translated, it is really two books welded uneasily together. The first part offers some interesting information about the history and social significance of hamams; the second is a guide to “50 of the still operating 57 historic baths of Istanbul” (I can’t help but wonder about the missing seven).

The first part is the more satisfactory. The chapter on the architectural evolution of the baths is perhaps the most successful, as well as the least self-consciously populist in the book. The plans and text are clear and informative and show a considerable degree of research. Another chapter discusses traditions and customs related to bathing. There are also references to the hamam’s place in literature (it has its own poetic form, the hamamiye), and to its influence on the Turkish language. Elsewhere we learn of the paraphernalia associated with hamams, the clogs, the copper bowls, the rough cloths for scrubbing and the various occupations of the attendants.

The sections on the tellaks (masseurs) and on the kulhanbeys, for example, are fascinating. The kulhanbeys were homeless children who were offered shelter in the boiler-houses (kulhan) under the baths in exchange for free labour. Organised into networks, they operated on the fringes of society until, in 1846, their protection rackets were seen as such a threat that they were suppressed. The type lives on, however, recognised by the jacket over the shoulders, the downtrodden heels, the swaggering walk and loud voice, and above all the attitude.

The second part of the book is more practical and starts with advice on what to expect and how to behave in baths, and an examination of their health benefits. Then follows the bulk of this slim book: the guide to individual baths, which is little more than a list, generously illustrated with photographs. Some of these are extremely beautiful, and it is a pity they were not given the benefit of more demanding production values and a fuller text. This fairly sketchy section does include useful information such as opening times, availability for men and women, current prices, approximate building dates and sizes. More attention is devoted to the larger, imperial baths such as those at Süleymaniye, Çemberlitas and Cagaloglu than to the modest, but often more charming, local baths, such as the Cinili hamam in Fatih.

Architectural or decorative features, however, which are so important to the atmosphere and enjoyment of a particular bath, are not generally noted. Equally, ominously few baths are recommended for their cleanliness. So, while listing most of the available options, the book fails to help the would-be bather make an informed choice. It is not quite the book I had been waiting for.
See Cornucopia 41, Bathing Beauty cover story: Inside Istanbul’s Grand Hammams.