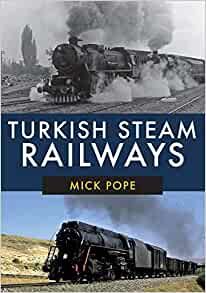 As Western railway enthusiasts found less and less to attract them in Europe they discovered that Turkey had steam locomotives aplenty, reflecting the fact that this was a country that had embraced Western industrialisation and modernisation ahead of most other Middle Eastern countries. This, and the shifting alliances Turkey had embraced, was also reflected in the variety of countries that had built the steam locomotives. Examples could be found from builders in Germany, Sweden, France, the United States and the United Kingdom. These varied from ancient specimens of Prussian State railway design to modern ten coupled designs built after the Second World War.

Finding and photographing trains presented certain problems. Train services in this large country could be sparse, timekeeping notoriously unreliable and the roads, very often of dirt, hazardous. However, if these problems could be endured the landscape offered fantastic photographic opportunities.