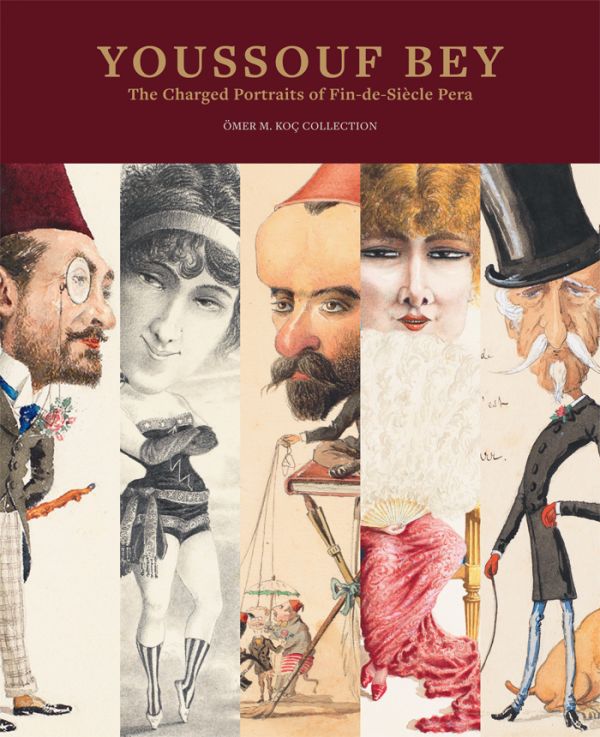 The Charged Portraits of Fin-de-Siècle Pera

Yusuf Franko Kusa Bey (1856–1933), a high-ranking bureaucrat in fin-de-siecle Ottoman imperial administration, was also a talented caricaturist. Because of his duties in the Ottoman Foreign Ministry, and spending most of his life in Istanbul, he was both a member and an observer of high-society social circles in Pera [Beyoğlu]. Ambassadors, ministers, diplomats, famous opera singers, painters, Pashas and Efendis, Madames and Monsieurs, were part of this social milieu, and most of them became eternally recorded through the ‘types and charges’ in Yusuf Franco’s caricature album. Including images of himself, he charged his subject materials, the people in his social network, with their particular qualities and transformed their portraits into witty caricatures that reflected contemporary scenes of social life and political debates in Pera. This book, which accompanies the facsimile of Yusuf Franko’s own caricature album, Youssouf, consists of three articles and an annotated appendix. While the articles analyse the majority of his caricatures from diverse perspectives (his family history and biography, the history of contemporary European caricature art and politics, and the social and spatial context in which he drew his caricatures), the appendix gives brief information about each caricature plate following the exact order in the facsimile. These extraordinary caricatures are published for the first time in their entirety since they were discovered in an antique rug dealer’s shop in Istanbul in 1957.

Sixty years ago, a rug dealer in the Grand Bazaar made a lucrative deal with an American diplomat who was on vacation in Istanbul with his wife. What he sold the American was not a rug, nor a carpet, and was quite unlike anything traded before or since in the bazaar or in any Istanbul antique shop. It was an 86-page album of unpublished caricatures from the Ottoman period, all dated to a span of 12 years from 1884 to 1896. That itself made it very interesting – but there was more to this album of curiosity. Titled Types et Charges, it was full of exceptionally well-crafted satirical drawings of members of the elite in fin-de-siècle Pera (today’s Beyoğlu). The artist himself was an aspiring member of this society with good connections in Ottoman bureaucracy as well as in Pera’s business circles. His name was Yusuf Franko Kusa (1856–1933).

Yusuf Franko was from a Melkite family (belonging to the Greek Catholic Church) who had emigrated from Lebanon at the end of the 18th century. Nasrî Franko, his father, had climbed the ranks of the Ottoman bureaucracy, eventually finding himself as the mutasarrıf (governor) of the Ottoman province of Mount Lebanon. His cousin and brother-in-law Naum Pasha Duhanî (1850–1911) was the nephew of Michel Naum, the owner of Pera’s famous Naum Theatre. Both Naum and Yusuf held important posts in the Ottoman foreign ministry, and, turning the governance of their ancestral homeland into virtually a family practice, both in turn became mutasarrıf of Mount Lebanon. Yusuf’s brothers were also diplomats.

Thanks to the roles he played in the busy diplomatic scene and to family connections, Yusuf enjoyed rare access to the private world of Pera’s crème de la crème. Among his entourage were ambassadors and chargés d’affaires. As one of them, the French diplomat Gabriel Hanotaux, related, “Youssouf was an amiable man, an excellent despatch writer, a skilled draughtsman, a witty cartoonist, a man about town, an enthusiastic bridge player who used to soundly beat the secretary of the Greek legation.” He also enjoyed the company of the most influential figures in Ottoman society and the patronage of two grand viziers, Tevfik Pasha and Said Pasha, as well as the friendship of the Levantine bankers of Galata. Unique, however, was his talent for caricature and his desire to satirise the “types” he encountered in his social world.

Among Yusuf’s targets were the stars who graced Pera’s stages, such as Jacques Damala and his wife, the actress Sarah Bernhardt (see this issue’s cover), who visited Istanbul four times from 1888 to 1908. This world also included painters such as Jean Brindesi and Roberto Preziosi, son of the famous Amadeo Preziosi, who may have inspired his interest in drawing and provided him with some form of artistic training. Clearly, drawing satirical portraits was a social game for these talented individuals – Yusuf portrayed Roberto as running after women, and Roberto drew Yusuf as a puppetmaster pulling the strings of Pera society with his brush and pen (page 20). Both appear in Yusuf’s extravagant album.

This game continued to be played, in a different format, by Yusuf’s nephew, Naum Pasha’s son, Said Naum-Duhanî (1892–1970). Duhanî was the product of the fading world of fin-de-siècle Pera so masterfully documented by his uncle. He picked up where Yusuf left off and, using his pen rather than brushstrokes, embarked on a “social topography” of old Pera in Quand Beyoğlu s’appelait Péra (1956), narrating the stories he had heard from his father and uncle and his own experiences of this high life. He vividly described the contents of his uncle’s album: “Yusuf Bey left a caricature masterpiece that featured all the notables of the old Beyoğlu… The diplomatic cage that included Gabriel Efendi Noradungyan (as a parrot), Nişan Efendi Civanyan (as a macaque), and Nikolaki Efendi Sguridis (as an African monkey) was a way for Yusuf, as a young and witty caricaturist, to showcase his unbridled sense of humour.”

What happened to this album after it was bought in the Grand Bazaar in 1957? It stayed in the hands of the same family for 60 years, never exhibited, never published, acquiring legendary status as it travelled the world with the diplomat and his family, stopping in Afghanistan, Nepal, Burma, Cambodia, Vietnam, Indonesia, Japan and Vermont. In 1966, an article in the American arts magazine Horizon introduced it to connoisseurs and art historians; the article was translated into Turkish and published in Hayat Tarih Mecmuası in 1969, the album’s debut in the Turkish-speaking world. From then on, sporadic references to Yusuf Franko’s work appeared as a footnote to the history of Turkish–Ottoman caricatures.

And so it remained until the album was finally found in Toronto, after a brief stopover in Reykjavik, and added to the Ömer M Koç Collection in 2016. Now, 120 years after Yusuf drew his last caricature, the album is making a remarkable return to Pera, the very milieu where it was conceived. Koç University’s Research Center for Anatolian Civilizations (Anamed) is holding an exhibition at its gallery in the heart of Beyoğlu.

Yusuf Franko’s Characters: An Ottoman Bureaucrat’s Caricatures tells the exciting story of Yusuf, his album and the world it grew out of. Curated by Bahattin Öztuncay and designed by Yeşim Demir, the exhibition is accompanied by a publication in two volumes; one reproduces the album in its entirety, the other places it in a social and artistic context. The historian Robert Darnton once suggested that the key to understanding the culture of an ancient or alien people was to explore what they laughed at. Now it’s our turn to laugh, and we are invited by Yusuf to play his game.