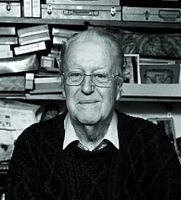 Some people seem to have a nose for finding things. The archaeologist James Mellaart is one of them. His nose led him to a discovery that changed the way we think about the beginnings of human civilization. That discovery, in central Anatolia, made him famous, and envied. Fame and envy led on to misfortune: one of his prizes vanished mysteriously into thin air, and his greatest find was snatched from him before he could finish work on it.