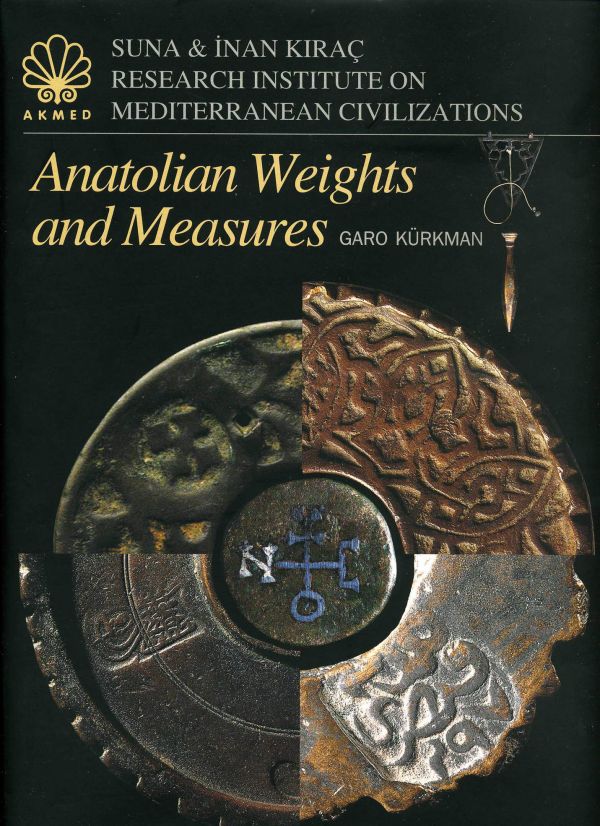 By Garo Kürkman
Published by Published by Akmed (The Suna and Inan Kiraç Foundation)
Sorry, this item is currently unavailable from Cornucopia.

Long before the Romans founded Londinium on the North Shore of a large river flowing to the sea in one of their cold and foggy offshore islands, accurate scales were being used all around Anatolia for trading between ancient societies. Leviticus 19:35-37 states “You shall not pervert justice in measurement of length,weight or quantity. You shall have true scales, true weights, true measures, dry and liquid. You shall observe all my rules and laws and carry them out. I am the Lord.” The Koran XI:84-85 instructs “Oh my people, give measure and full weight in justice, and wrong not people in respect to their goods.”

The Suna and Inan Kirac Research Institute on Mediterranean Civilizations has assembled a museum full of scales and weights used from prehistory to the present around Anatolia, that broad plateau between the Black and the Mediterranean seas that we call modern Turkey. Having successfully published on their ceramics collection they induced Garo Kürkman to create a book on their scales and weights. His six pound, coffee table sized tome shows all 513 items of the collection in magnificent color.

Further he shows many detail photos illustrating specific subjects. Moslems obey God’s command to create no graven images, but the sweeping script “Turgas of the Sultans, Municipal Assay Stamps and Marks provide visual evidence of a vibrant past and also great identification for your possible finds. He has included many conversions tables collected from such standard references as Kisch updating and correcting them citing data from the Kirac Collection.

The book starts with weights from the first quarter of the second millennium BC. It continues with Bronze weights used in Mesopotamia in the third century BC. There is extensive coverage of the Greek and Roman periods. The Byzantine period from the 5th - 13th century AD is covered with a number of scales from that period’ as well as weight conversion tables.

The book’s major strength is in its coverage of Dirhem weights. This weight system was derived from the Greek Drachma and this book covers its introduction and efforts toward standardization in Islamic societies. Weights from the reign of Mehmed II, 1464 AD through Mehmed V. 1909 AD are measured, explored, illustrated, correlated and tabled in the book.

In order to prevent fraud the Ottoman government made it compulsory that weights be inspected and stamped with sweepingstroked, assay marks that they call “Turgras.” Shown in the book are the Turgras of 40 Sultans, 30 towns and 20 Makers, which is a tremendous tool to provide provenance for your random weight.

And then the Metric System came to Anatolia. The book has a copy and translation of the first law promulgating the metric system in Ottoman lands. It has a poster showing the size and construction of all the metric weights and measures. Tables are provided to state and convert old measurements to this new system. It gives some comparative satisfaction that their world had all the problems of the West.