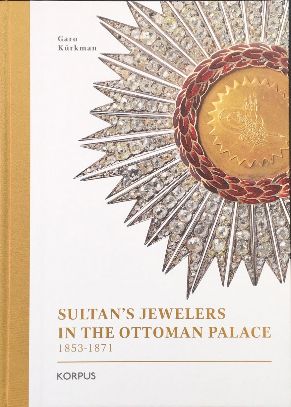 By Garo Kürkman
Published by Korpus

The Sultan’s Jewelers in the Ottoman Palace throws light on the 19th-century administrative and cultural history of the Ottoman Empire during a period of significant transition. The information obtained from the records of the “Jewelers Chamber” situated in the core of the Imperial Mint, over a period of 17 years ( A.H. 1270-1287 / A.D. 1853-1871) while the institution was under the management of the Ottoman Armenian family Duz and the reigns of Sultans Abdulmejid and Abdulaziz presents us with an invaluable treasure of information, the like of which has not been seen before. The records in the registers of the Imperial Mint Jewelers Chamber basically relate to the craft performed in the shop, but at the same time reveal very important historical facts.

The information that gats accentuated are the specifics regarding the types, nature and cost of the orders and medals awarded to the military and civilian dignitaries honored by the Sultan. Also from the type and cost of the gifts shipped to Kaaba , to custom made jewelry for the Imperial Harem, from repairs made to worn out objects, to the type of jewelry the crown princes preferred to wear, the extravagance of certain crown princes mothers, to the type and value of items crafted for people with or without rank and certain other data which are now completely out of our reach are found in these records.

In these records , taking the circumstances of the period as a basis, we also learn a lot about the jewelers terminology used in mid 19th century, names and costs of medals and orders employed in the Empire, details of precious gifts delivered to kings, queens and dignitaries of great nations giving direction to the era s politics and economy, information on goods imported from abroad or manufactured at the Imperial Mint only to be used at dinner parties and now lost in history, as well as the names of masters outside the Imperial Mint, names of articles and furnishings used at dinner parties given at Neshad-abad and Feriye Palaces, and other diverse data reflecting the spirit of the Tanzimat era, somewhat related to the activities of the Jewelers Chambers but which have not found their way into official documents.