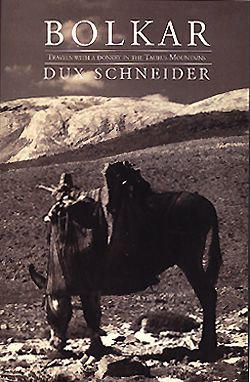 Travels with a Donkey in the Taurus Mountains

‘A valuable cultural record that’s as insightful as it is entertaining.’
Tom Brosnahan

Dux Schneider was drawn to mountains, and he recognised that in a rapidly modernising country the traditional life of mountain peoples would undergo inevitable and irreversible change. His trek through the Bolkar range was a dream come true, the culmination of his Turkish explorations. He got there before television and mobile phones, when the Yuruk nomads and Tahtacis were still a people apart. This book is a rare picture of that time, place and people, a valuable cultural record that’s as insightful as it is entertaining - Tom Brosnahan


It had been a good three hour’s walk from the village of Maden, where the side road into the mountains ended. The donkey I had bought the previous day had been walking politely at my pace until we rounded the last bend cut through the rock, high above a stream. There he stopped, even though I had been following his previous owner’s advice and talking to him. But now talking, commanding, pleading, all to no avail. He looked back. I pulled forward. He came… two or three steps to a nice bunch of thistles, which he plucked and munched. At last he went on, but more hesitatingly and reached to sniff at any dried dung he found along the way.

Near where the path joined a small stream, a gruop of camels were grazing. The higher valley was opening out to a roughly circular plain about a mile across. As I passed a small hillock, a sheepdog raced down with leaps and barks from near a black tent. The donkey laid back its ears and faced this welcome, turning as the dog circled us. A boy came running over and threw a few stones at the dog. Without more than a return of greeting, the boy beckoned and strode around the hill; he led us towards the farthest of four tents that came into view. Here he unloaded the bags, removed the saddle and went away with the donkey.

Dux Schneider was born in the USA in 1924 and grew up in Belgium and England. After working in publishing, he turned to writing. Inspired by Victorian travel books, he and his wife Monica went to eastern Turkey and were among the first climbers in Hakkari Province.