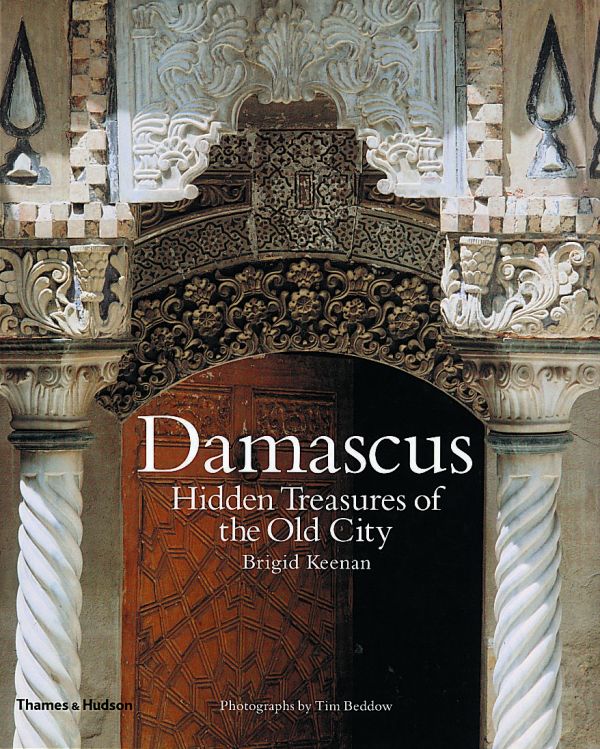 This is a stunning book, owing much to the brilliance of Tim Beddow’s photographs. As far as recording the domestic architecture of the Old City of Damascus is concerned, it may have come just in time, for many of the buildings and their wonderfully ornate interiors are collapsing; at least through this work we have an idea of what is being swiftly lost. Such is the glamour and skilful lighting of the subjects that even the ruined bits look attractive (pp103-4), and I have a feeling that Beddow could continue to record it till the very end, where nothing is left but a crumbling pile of wood and plaster, and still make it look wonderful. Perhaps he should.

There is no doubting Brigid Keenan’s passion for these houses, mostly of the eighteenth century and later. She is good at relating the houses to the inhabitants who occupied them, including illustrious foreigners like Lamartine, Lady Hester Stanhope and Richard and Isabel Burton. She has read widely but not very thoroughly. Notable omissions are Ecochard’s Les Hammams de Damas (not so much for the architecture of the baths, but the fundamental analysis of the use of water in Damascus); she has noted an article by Dorothea Duda, but missed her pioneer study on these houses, based on the two-score interiors removed in the 1930s and 40s to Beirut, and inserted into Henri Pharaon’s family mansion. She lists Godfrey Goodwin’s Islamic Spain, but not his monumental A History of Ottoman Architecture, an omission rectified by the publishers, who mention it prominently on the back flap.

And this brings us to the point. Why was there such an explosion of architecture and baroque decoration from the beginning of the eighteenth century? The answer is a simple economic one, for the emerging merchant class was suddenly free - the Ottoman controls were slackened, and under the ‘Azm governors everyone prospered. Keenan herself notes that at least three of the most opulent houses belonged to wealthy merchants, the Aqqads, Istwanis and Quwatlis. This phenomenon occurred not only in Damascus, but also in Aleppo and Hama (the evidence for which was effectively demolished by the late President Hafez Al-Assad during a political spat a couple of decades ago).

It is easy to sympathise with Keenan’s distress at the disappearance of these magnificent mansions. But it is harder to see what the remedy might be. The French mandate decided to open up the Old City after World War II by pulling down a large area to the south and erecting quite remarkably ugly concrete blocks. The present regime has gone one stage further and cleared the area in front of the Great Mosque, which it is insensitively restoring. In the meantime, the traditional inhabitants of the Old City are happily ensconced in modern apartment blocks in quarters outside the city walls, with all mod cons. Who can blame them? The problem is, you cannot turn all the old houses into museums. And if the multi-millionaire Wafic Said could not prevent his family home being torn down, the childhood home which he so sentimentally evokes in the preface, what hope is there for anyone else?

Finally, what about this so-called “Syrian” style? It is essentially the vernacular of the Ottoman provinces found all the way through Turkey, Syria and Palestine to Egypt. The basic architectural plan is the same, and the wall-paintings and stucco work are universal throughout Turkey and the Levant. In Syria, the originality lies in the survival of the Mamluk tradition of ablaq, courses of different-coloured white, black and red stone. The Syrian tilework is in the Iznik manner, but differs in that it lacks red and uses instead an apple green never found in Turkey. When it is good, it is terrific, every bit as fine as Iznik. There is certainly a fantastic exuberance in these interiors, for which a polite definition might be “a bit over the top”.

This is a poignant book, and two images stick in my mind. One, a blue and black Syrian jar with 16,000 gold and silver coins spilling out of it, important not for the coins, but for dating the jar. The Mamluk coins are of the thirteenth to fifteenth centuries, and there are also “some very early Ottoman coins”; one would like to know more. The second is an early-morning photograph of a street behind the Great Mosque, with a little girl silhouetted in the sunlight. This in itself is worth a trip to Damascus.