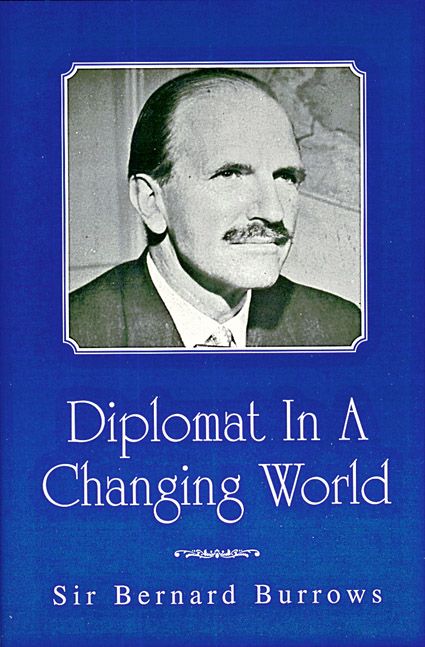 Diplomat in a Changing World

Reviews for Diplomat in a Changing World

A Sharp Mind and a Blind Eye

Towards the end of my time as a student, when I had begun to dabble in journalism, I was surprised to find a postcard waiting for me one morning from someone of whom I had (I must confess) never previously heard.

“I wonder if you might be able by any chance to come and have dinner with us next Tuesday? It would be so nice. Inez Burrows.” And so I went for what was the first of many dinners at the London home of Sir Bernard Burrows, where professors, ambassadors, foreign-office officials, Turkish millionaires, and more good friends from Turkey than I can remember, sat around the table in a relaxed and convivial spirit.

Years afterwards, meeting people in Turkey or Whitehall, they would often begin conversations with the remark: “I think we met at the Burrowses.”

By the time I met them, it was already a decade and a half since Sir Bernard and his wife had left Ankara. His connections to Turkey stretch back to 1958, when he was sent there as ambassador. In the opinion of many good judges, he was perhaps the best ambassador Britain sent to Turkey in the twentieth century, and undoubtedly the one that was its warmest friend and advocate in public life afterwards. A strong supporter of European integration, Sir Bernard has been advocating Turkey’s place in the European Union for over four decades and lists the delay in bringing Turkey closer into the EU as one of his main disappointments.

“When we arrived in Turkey from Arabia,” writes Sir Bernard in his recently published memoirs, Diplomat in a Changing World, “it felt as if we were coming home.” He had never visited Turkey before and had no previous knowledge of it.

The most dramatic moment of his ambassadorial career came at 4am on May 27, 1960, when tanks rolled up the hill outside the embassy on their way to overthrow the Democrat Party government of Celal Bayar and Adnan Menderes. Sir Bernard recognised the flaws in the Democrats but also admired their commitment to the good of their country, and especially the skills of their foreign minister, Fatin Zorlu, who was subsequently hanged with his prime minister for essentially political reasons.

How does a diplomat, who has worked closely with politicians and made friends of them, react when they are relegated to prison and judicial execution? Lady Burrows baked cakes and sent them, “by devious means” and with her husband turning a blind eye, to the prisoners. That was the private response.

For the ambassador, it was business as usual with the new government once it was recognised. “We had to forget previous acquaintances and friendships, and to get on as good terms as possible with the people who were then governing Turkey. Raison d’état predominated and personal feelings had to be forgotten – ethical foreign policy had not yet been invented.”

When government and public opinion in Britain reacted sharply against the execution of Menderes, Sir Bernard worked hard to prevent a diplomatic rupture between the two countries. Ankara hinted to him that his personal popularity had possibly prevented a recall of ambassadors.

Sir Bernard went on to be British permanent representative to Nato and number two in the Foreign Office (in which capacity, though not previously a member of the “intelligence community”, he chaired the official committee coordinating British intelligence during a turbulent period of notable exposés).

Earlier in the 1950s he had been political representative in the Gulf, managing the external interests of the Gulf states – most of them at that date not yet oil-rich, merely leftover dependencies from the end of British rule in India. In that capacity, he had had at one point to use his forces and direct a tiny local war.

This autobiography, written while its subject was already in his nineties, is the story of how British diplomacy changed from that of a top player on its own in a world dominated by a few nations to one dominated by the pursuit of trade and economic ties as a medium-sized power in a world managed by combinations of alliances.

In his book, and today in his London home, Sir Bernard handles this transformation with detachment and smoothness. “This is not a kiss-and-tell biography,” he writes, and though he is occasionally mordant about the limitations of the Foreign Office at times of crisis like Suez, there are no intelligence revelations. Even close reading is not always sufficient to reveal which of his ministers he liked and which he loathed. It is easy to dismiss this as old-fashioned courtesy, but one suspects that at another level is it also shrewd professionalism: a keeping open of options.

Sir Stratford Canning, the greatest of Sir Bernard’s nineteenth-century predecessors, also took up his pen when he was in his early nineties. These memoirs stretch to only 176 pages, but they capture times, people, voices, and experiences which have already receded into the distant past.