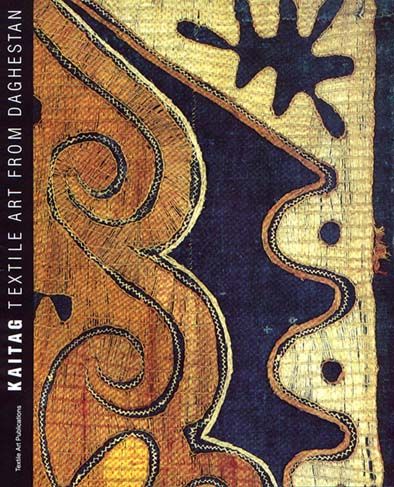 80 colour plates & photographs, 180+ b/w illustrations, plus drawings & a map of the region

In his text, Robert Chenciner has skilfully combined Kaitag history, philology, ethnography, material culture and textile technology to provide a context for their rich and exciting art. To accompany the text, forty-seven outstanding Kaitag panels, representing the extraordinary variety of designs, colours and techniques which combine to create these great masterpieces, are presented on full colour plates. These also form part of a comprehensive catalogue of 171 examples, each illustrated in black and white, with a full description and technical analysis. The embroidery stitches are fully explained with diagrams, and many of the dyes have been analysed.

This is one of the most absorbing books on art published in the past year: the first survey of the village embroideries of Kaitag, a small, little-known group of peoples in the inaccessible Caucasian lowlands and mountains north of Derbent in Dağhestan.

Robert Chenciner has been researching the subject since 1986 and the introduction to the book includes photographs of brooding landscapes from his travels. The catalogue contains 171 pieces, and the colour illustrations make the most of the staggering repertoire of patterns and colours in Kaitag art.

For all its apparent isolation, the area has been subject to waves of settlers. Paganism, Zoroastrianism, Islam, Judaism and Christianity are all discernible in the embroidery. In addition to decorative Ottoman and Coptic motifs, there is a deep-rooted talismanic and zoomorphic symbolism. According to Chenciner, even earthquakes have shaped the imagery.

Kaitag embroideries are silk on cotton, rectangular in shape and display numerous knots and dyes. No fewer than eleven yellows, three reds, two blues, one black and four greens have been identified so far. Most dyes were produced locally – madder was exported from Derbent – though lac was probably imported from India and cochineal from Armenia.

Most known Kaitag dates from the 16th to 19th centuries. Sadly the traditional art of embroidery was stamped out under Soviet rule, though Chenciner during his research met elderly women able to recall the symbolism and the extraordinary rites associated with embroideries.