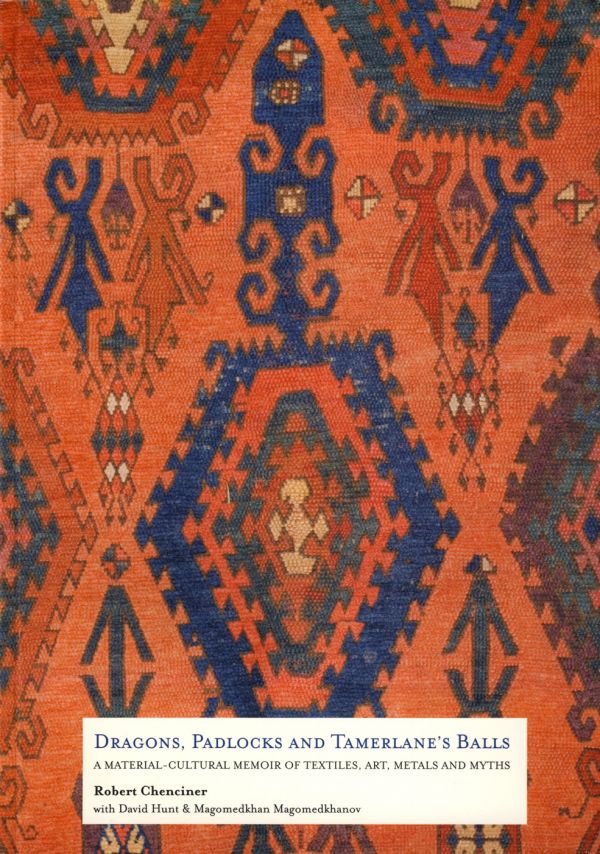 A material-culture memoir of textiles, art, metals and myths

As entertaining as it is informative, this is an illustrated visual memoir by writer and ethnographer Robert Chenciner of his wide-ranging career, covering his work on Swedish padlock keyhole covers, rugs from the Caucasus and Central Asia and his pioneering work on the vanishing art of women’s tattoos in Dagestan. Chapters also include his research on linking material culture with folklore and fabulous creatures such as dragons in the Caucasus, and explaining the Chintamani, the mysterious three balls used as a potent symbol by the great Mongol conqueror Tamerlane and his successors. Written over a period of 50 years, with some 230 colour illustrations, this memoir combines biography and independent studies in decorative art, ethnography, ornament and materials.

The brief introductory sections describe the author’s childhood fascination with design; his struggle between scholarly study and popular performance which included his successful ballet Steps Notes and Squeaks (1978), with Maina Gielgud and the controversial Bayeux Tapestry Shish Kebab Mystery (1990) which questioned the embroidery on stylistic grounds; and the story of his progress from art history A-level to collecting textiles from Turkey, to ethnographic and art studies in the Caucasus.

The main text begins and ends with afterwords on two long-gone friends, who changed his views on art - the Italian aesthete Carmelina Anfuso, with her fascistic baggage; and the pugnacious British critic Peter Fuller, on his journey from Marxism to Thatcherism. The main text is a chronological-cum-material series of original monographs prefixed by the remarkable stories of their creation: Swedish padlock keyhole covers which won a Trevelyan scholarship to Cambridge (1963); the creation of the author’s dinner service in ebony, silver and bulat steel (1985-2009); Tamerlane’s Balls or Chintamani, the three ball and two tiger-stripe ornament found from Central Asia to the Ottoman empire (1976-1979); Pastiche rugs of the Caucasus (1983) which compares stylized designs with their classical models in 16th-17th century Iran and India; the unique carpets from the Sarkisla mosque in Central Anatolia, (1984) dated by mural inscriptions; a history of representations of dragons in the Caucasus written with Magomedkhan Magomedkhanov, Chenciner’s Daghestani collaborator, with local folklore, translated by David Hunt, and their predecessors in Arabia, Turkey and Iran; and a similar history of eagles in the Caucasus.