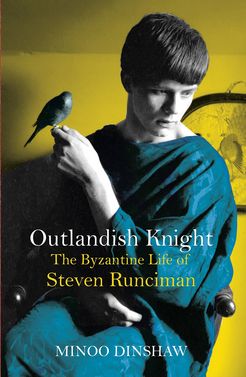 The Byzantine Life of Steven Runciman

In his enormously long life, Steven Runciman (1903–2000) managed not just to be a great historian of the Crusades and Byzantium, but Grand Orator of the Orthodox Church, a member of the Order of Whirling Dervishes, Greek Astronomer Royal and Laird of Eigg. His friendships, curiosities and intrigues entangled him in a huge array of different artistic movements, civil wars, Cold War betrayals and, above all, the rediscovery of the history of the Eastern Mediterranean. He was as happy living in a remote part of the Inner Hebrides as in the heart of Istanbul. He was obsessed with historical truth, but also with tarot, second sight, ghosts and the uncanny.

Best known, perhaps, for his three-part History of the Crusades (1951–54), and in the annual Runciman Lectures now held every February at King’s College, London, his life is a rich source of story-telling, which is undertaken with remarkable success by Minoo Dinshaw in this debut work shortlisted for the 2017 Sunday Times/PFD Young Writer of the Year Award,. Both a funny book about a man who attracted the strangest experiences, it is also a serious one. It is about the rigours of a life spent in the distant past, but also about the turbulent world of the twentieth century, where so much that Runciman studied and cherished would be destroyed.

Anthony Bryer’s article about Runciman, The Bard of Byzantium, was published in Cornucopia 22.

‘Dinshaw writes with extraordinary poise and confidence. I had to reach for the dictionary more than once, and his judgements are both polished and reasonable. There will be many books about Byzantium; but never another biography of Runciman.’ – Jason Goodwin, (Cornucopia No 55)

‘Minoo Dinshaw’s Outlandish Knight: The Byzantine Life of Steven Runciman is idiysyncratic in some of its digressions and structure but Dinshaw bubbles with nimble wit, wicked gossip, curious oddities and a walloping glee for his subject.’ – Richard Davenport-Hines, The Spectator