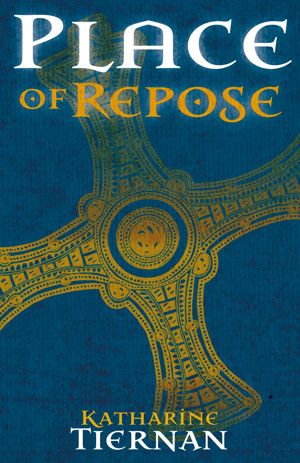 The year is AD 875, and the Danish King of York, Halfden Ragnarsson, is carrying fire and sword across Northumbria, burning churches and monasteries and killing their inhabitants. The monks of Lindisfarne have to flee, taking with them the Lindisfarne Gospels and Saint Cuthbert’s relics. For seven years they journey seeking to find a new home for the saint, a journey that changes the lives of those who bear him for ever.

Place of Repose is a tale of violence and intrigue, revenge and reconciliation – and of true love lost and found. This extraordinary story, told by novelist Kathy Tiernan, combines with the skilful and engaging recreation of characters and relationships at this fateful moment in the survival of Northumbria. Always in the background is the mysterious presence of the Saint, as the threads of destiny that will bind Dane and Saxon, heathen and Christian begin​ to weave together.

Katharine Tiernan is a Northumbrian by birth and spent many childhood afternoons on the shores of Lindisfarne. She studied English Literature at York University and worked as a teacher and community artist. By the turn of the millennium, both Katharine and her Australian husband were hankering for the wide-open spaces of the north and moved back to Northumberland. Place of Repose is her second novel set in the Anglo-Saxon world of early Christianity. It reflects her interests in literature, spirituality and the inspirational landscapes of the north.

Three historical novels on the life and times of Cuthbert, Saint of the North, by the Northumbrian author Katharine Tiernan.
Offer price £30 for all three
Save over 20% on the Rrp of £38.97