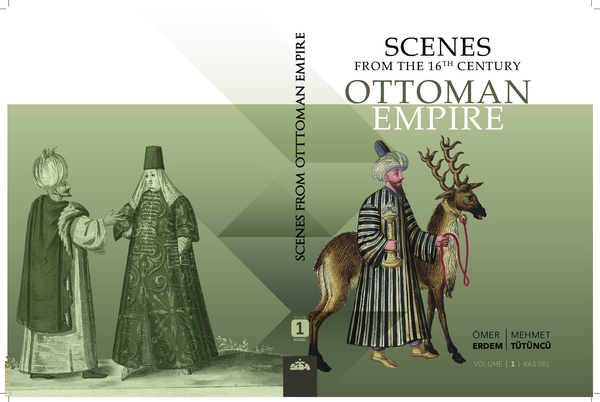 In 1573 the French traveller and diplomat Philippe du Fresne-Canaye extolled the joy of people-watching in Istanbul: “by the door of our house… lazily we watched the foreign costumes of those who passed by; we derived much pleasure from this.”

Another way foreign visitors could enjoy and understand Ottoman society was through a genre of book known as an Ottoman costume album. These manuscripts emerged in the 16th century and swiftly became a popular mode of recording and codifying the Ottoman world.

Costume books are simple in their aesthetics but complex in the stories they can tell. Each page depicts an individual character in their distinctive clothing against a plain background, accompanied by a brief label reflecting the owner’s interpretation of that figure. These manuscripts offer a fascinating glimpse into the experiences and understanding of individual travellers.

Costume books are also extraordinary for presenting Ottoman life from many angles: high and low, rarefied and routine. Alongside the Sultan and his imperial household, one typically finds brightly plumed soldiers, bejewelled Venetians, ragged dervishes and sombre Greek monks. Images of religious and cultural customs are common too, with examples including imperial processions, Bayram festivities, Jewish funerals, and the feeding of stray dogs to name just a few.

The volume under review is the first in an exciting new series of facsimiles of early modern Ottoman costume books. It publishes an important yet rarely studied album in Kassel, Germany (Universitätsbibliothek, 4° Ms. hist. 31). The brief introduction is intended for the general reader. Here the editors Ömer Erdem and Mehmet Tütüncü contextualise the manuscript and date it to before 1590, discuss its subject matter, and provide a valuable table showing how its imagery compares to other 16th-century prints and manuscripts. The remainder of the volume reproduces each illustrated folio in handsome detail.

Little is known for sure about this manuscript. As is often the case with costume books, the original owner is unidentified. He was probably an important figure who travelled to the Ottoman world in the 1580s for trade and diplomacy (the two rarely proved distinct at this time). The artist is unnamed, too, but he was one of several itinerant European artists producing these manuscripts in the Ottoman capital. The Kassel album is labelled in Old German throughout, except for four images enigmatically left blank. The editors helpfully provide translations of each label in modern German, English and Turkish.

The Kassel album is rightly compared to a contemporary manuscript that once belonged to Bartholomäus Schachman (1559–1614), who travelled to the Ottoman world as a young man circa 1588–89 before later becoming mayor of Danzig (modern-day Gdańsk in Poland). His album is now owned by Doha’s Orientalist Museum (Cornucopia 48).

The Kassel album contains 159 watercolours, compared to the 105 images in Schachman’s book. Intriguingly, they share 95 near-identical images, even though the two manuscripts are by different artists.

Several crucial differences set the Kassel album apart. In particular, it contains many architectural and archaeological scenes. Highlights include the Column of Constantine (fol. 11r) and the ancient monuments in the Hippodrome (fols. 13r–17r). The Kassel manuscript is also structured for dramatic effect. Part-way through the album the reader encounters five successive folding scenes (112r-116r).

Unfortunately, these are not replicated in the facsimile, but before and after images show how the flaps work. The reader begins to unfold a series of imperial processions comprising cliques of peyks (imperial bodyguards), ranks of Janissaries, and court officials on horseback. They all pass through an arch, then – with another flip of the page – the reader enters the second court at the Topkapı Palace. Lifting the flap reveals a European embassy being granted an audience with the sultan. This was the pinnacle of any diplomatic mission to the city – and it may even record the original owner’s greatest achievement in the capital. Regardless, the artist skilfully conveys the exclusivity and significance of this scene through these interactive devices.

Other groups of images are more teasing. On folio 172r we encounter a woman going to the hamam. Unusually in this album, she is shown walking from left to right – our attention is immediately piqued. The following image (fol. 174r) depicts the stone exterior of a bath house, and at this moment one can imagine the original audience’s anticipation. As with the Topkapı scene, the reader is on the cusp of accessing one of the most exclusive spaces in the Ottoman world: a women’s hamam. But these expectations are confounded. The following page (fol. 174r) reveals a naked man receiving a massage inside the hamam rather than any bathing women!

The reproductions in this volume are the stars of the show: they are generally slightly larger than to scale, which allows the precise and sensitive artistry of the album to shine. While it would have been pleasurable to unfold and lift flaps in the facsimile itself, the reader can still partake in the performance of people-watching in 16th-century Istanbul, much as Fresne-Canaye enjoyed doing so many years ago.