Store > Books > The Anatomy of a Tradition: 150 Years of Robert College 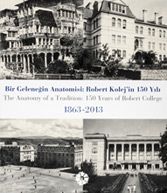 The Anatomy of a Tradition: 150 Years of Robert College

Published by Istanbul Research Institute
Sorry, this item is currently unavailable from Cornucopia.

Seldom would a book about the 150th anniversary of a college preparatory school deserve a review – but this is no ordinary school and this is no ordinary book. Described by its editors as a catalogue and written by alumni, it covers not only the school’s history but its place in national and international history, published alongside an exhibition last year at the Istanbul Research Institute, part of the Suna and İnan Kıraç Foundation.

In 1863 the United States was embroiled in the Civil War and paid little attention when a missionary named Cyrus Hamlin (a cousin of Abraham Lincoln’s vice-president, Hannibal Hamlin) and Christopher Robert, a wealthy patron, established a school – not to evangelise, but to teach in a secular environment of higher learning.

This innovative approach to education met with much resistance, but by the end of the first year the school’s enrolment had risen from four students to 20. By 1866 there were 96 – from Armenia, Greece, Bulgaria, Turkey, Russia, France, Holland, Syria and Switzerland.

In the first essay, Ted Widmer, former speechwriter for Bill Clinton, New York Times contributor and a descendant of Hamlin, writes: “Above all Robert College has always been Turkish and American simultaneously, merging new educational ideas with an ancient setting, in a way that was unique within both traditions. In short, Robert College has been many things to many peoples over its century and a half.”

The school has had a pivotal place in the history of the US, Turkey and the region. Past presidents have advised the US government on Turkish affairs; two graduates became prime ministers of Bulgaria, helping to found that country; and the school helped in the formation of “soft diplomacy” with the US before a formal diplomatic relationship was established. The college also brought the telegraph and basketball to Turkey. Beyond the history of the school, this catalogue, in its collection of essays, touches on topics spanning the cultural and political transformation of Turkey, ranging from the Treaty of Lausanne and the possibility of bringing nuclear power to Turkey to changes in women’s attitudes to marriage. There are fun personal memoirs, as well as essays on sport, architecture and engineering.

But perhaps it is the wonderful photos – from the late 1800s all the way to 2010 – that bring the history, educational plight and transformation to life, depicting the people, buildings and activitythat made Robert College one of the most historically important schools in the world.