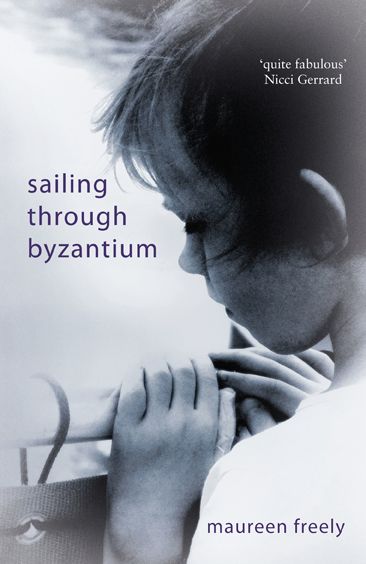 By Maureen Freely
Published by The Linen Press

Reviews for Sailing Through Byzantium

‘History pours through this wonderful novel, but refracted through a young girl’s enchantment and dread. This is the story of a country, a city, a family, a scared child, in which memory throws the past into a kaleidoscopic pattern, vivid and always changing. In other words: quite fabulous!’ Nicci Gerrard

Maureen Freely’s new novel, Sailing Through Byzantium, is a tense thriller evoking childhood in Istanbul in the early 1960s. Mimi is eight years old when her progressive, bohemian parents move to Istanbul to escape the oppressive atmosphere of McCarthy-era America. For Mimi it means leaving behind a safe and familiar world where grandmothers bake cakes and little girls eat Oreos and pledge allegiance to their flag.

Transplanted into an alien and confusing city, she struggles to make sense of new alliances and old allegiances, witness to an expatriate society whose lies and betrayals hover round the child like partygoers round the piano.

The piano in question is played by Baby Mallinson, a gay black American whose rambunctious improvisations deliver a bitter-sweet soundtrack to the book. Mimi’s mother, Grace, has given up singing on her husband’s insistence, but every now and then she can be persuaded to sing for her children and for Baby. ‘Stormy Weather’ is Mimi’s song.

It is Grace who first encourages Mimi to use her eyes and ears as the family plan a Mediterranean cruise aboard a Soviet ship, and Grace who protects her, with wavering constancy, from her increasingly baffled and irritated father, a physicist of upright morals and little humour.

An old family friend, Mr Guttman, has given Mimi a sketchbook as a parting present. As Mimi learns to draw, her sketchbook becomes a record of the people and situations she encounters, beginning with a sequence of mishaps with a fire extinguisher when she is waitressing for the Admiral and his wife. Mimi’s loss of innocence is expressed in the dawning realisation that the grown-ups who claim to admire her talent are, for the most part, insincere.

One by one, her parents’ friends are penetrated by Mimi’s precocious gaze. Pinned to the pages of the sketchbook, their motives and relationships are woven into a compelling narrative composed of half-truths and suppositions. Before long she is using lemon juice as invisible ink to scrawl the secret comments and reports that accompany her drawings. There’s the glamorous Nella, with her slim, brown legs and officious husband, Rex; the starchy admiral and his appealing Quaker wife, who comes to Mimi’s rescue when she’s sent off to school again without a decent lunch; Mimi’s older friend, Dora, who peddles unreliable gossip collected by her mother, a freelance journalist; and of course the enigmatic party of Turks, Russians and Americans who assemble on board the Soviet ship, the Felix Dzhershinsky, en route for Egypt.

Freely has an ear for dialogue, and her sly humour stalks the pages of this novel. When Baby questions why the girls are named after consumptive opera heroines, Mimi’s mother crisply reminds him that “‘Mimi and Violetta didn’t die, because they were actresses. After the curtains went down, they left the stage, stepped out of the tragedy that had produced such beauty, and went on to fabulous feasts, to be fêted by suitors and sycophants. They escaped from their grasp to sail off to sing other operas, in the other great cities of the world.’

Mimi’s fears, and her efforts to contain them, weave themselves into a tautly paced plot that culminates in the Cuban missile crisis, marked by her parents with an End of the World Party as Kennedy’s deadline runs out. In a drily restrained allusion to an offstage drama, never articulated, Mimi’s younger sister is being regularly abused by a workman on her way to school; but nobody notices, Mimi least of all, as they all focus their attention on their love lives, their lies and the climax of the Cold War.

Freely’s feeling for the period is spot-on: there is not a false note. Wild parties on the Bosphorus are punctuated by the sinister tremors of huge Soviet ships passing through the straits, black shadows which slowly block the lights from the Asian shore. Mimi learns and understands too much, and yet too little: the reader is kept guessing, but is never let down.

Finely calibrated, compassionate and compellingly observed, Sailing Through Byzantium is a triumph.

The writer and historian Jason Goodwin’s fifth Yashim adventure, ‘The Baklava Club’, will be published in 2014