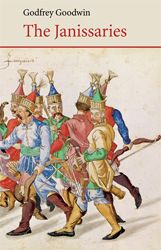 The Janissaries formed the élite corps of the army and were one of the pillars of the empire. In their prime they were the vital element in the rapid expansion of the state; in the end they were one of the institutions that most evidently marked its decay. From the review by John Freely, Cornucopia 7


This is a fascinating subject that has never before been explored in such depth. The Janissaries formed the elite corps of the army and were one of the pillars of the empire. In their prime they were a vital element in the rapid expansion of the state; in the end they were one of the institutions that most evidently marked its decay. The Janissaries were finally destroyed by Mahmud II on July 16, 1826, a ‘final solution’ known as the Auspicious Event, which allowed the sultan to begin a programme of reform in an attempt to save the empire from a fate that eventually overtook it in 1923. The soldiers’ destruction was so complete that not even their tombstones were spared, save for one in a graveyard in Üsküdar, distinguished by a sculptured representation of their curious headdress, a crested cap with a hanging fold behind, known as ‘the sleeve of Hacı Bektaş’.

Goodwin’s book tells of the role the Janissaries played in the life of the Ottoman Empire in its widest scope, in times of both war and peace (which often resembled war if the Janissaries were on the loose). It describes their organisation, the institutions in which they served, the campaigns in which they fought, the ways in which they lived while on the march or raising hell in Istanbul, the outrages they perpetrated in the course of their many mutinies (including the overthrow and assasination of several sultans), the reasons for their decay, and the bloody drama of the Auspicious Event.

This is not so much a history of the Janissaries as ‘an attempt to understand them as human beings – which they were’, acknowledging ‘the Janissaries themselves, the million or two without whom the great architecture of the Ottomans would never have been accomplished’.