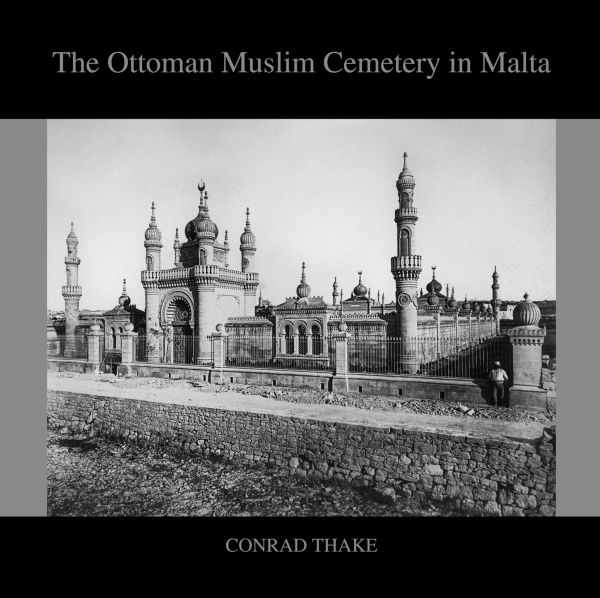 The Ottoman Muslim Cemetery in Malta

Price €45 plus p&p
Email cthake@go.net.mt to order
directly from the publisher

The book traces in detail the history of a new Muslim cemetery in Malta, from its inception to its construction and completion in 1873–74. It investigates the process of commissioning and implementing this architectural project through an intricate set of relationships between the colonial authorities in Malta, then a British island-colony in the Mediterranean, and the Ottoman, Tunisian, and Moroccan authorities. It considers the key roles played by the various institutional actors and protagonists, involved in conceptualizing and executing the project, from the Ottoman Sultan Abdülaziz I, acting through his political and cultural interlocutor, the Ottoman consul Naoum Duhany, to Emanuele Luigi Galizia, the Maltese architect who designed the cemetery, and the British colonial authorities who permitted its construction.

The author also explores issues relating to the emerging forms of neo-Ottoman architectural representation during the late nineteenth century, as was actively promoted within a Western European cultural context, and in this case, situated on the peripheral edge, far removed from the traditional cosmopolitan urban centers. The Ottoman patronage of an overtly exotic and Orientalist building complex, “exported” to a British colonial outpost in the Mediterranean, gives rise to a series of political and ideological issues. This case study serves to provide broader and revisionary insights into the current discourse on Orientalism, not as a closed and binary system, but rather as an open-ended and flexible form of artistic representation.

Besides the main analytical text, the book includes several transcripts of original archival documents, old photographs and a comprehensive photographic documentation of the cemetery complex in its present state. A selection of architecture drawings comprising a general plan and elevations of the cemetery, accompany the text and documents.

Conrad Thake is an architect and architectural historian. He graduated with a B.E&A. (Hons.) degree in Architecture and Civil Engineering from the University of Malta, an MA in Regional Planning and Resource Development, University of Waterloo, Canada and a Ph.D. degree in Architecture, from the University of California, at Berkeley, United States. He has co- authored with the late Dr. Quentin Hughes, the two volumes, Malta – The Baroque Island, (2003) and Malta – War & Peace, an Architectural Chronicle 1800-2000, (2005). He has published in several international architecture journals such as L’Arca, Demetra, Palladio, and Spazio e Società. Thake is a member of CICA - Comité International des Critiques d’Architecture / International Committee of Architectural Critics. He has in the past, served on several public committees including the Development Control Commission, the Planning Appeals Board and the Valletta Rehabilitation Committee. Architect Thake is currently an associate professor in the History of Art department within the Faculty of Arts, University of Malta.