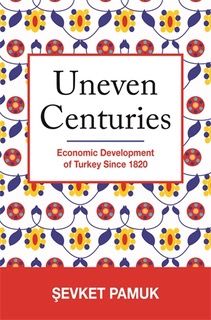 Economic Development of Turkey Since 1820

Described as ‘the first comprehensive history of the Turkish economy’, Uneven Centuries has been widely acclaimed for its ‘rich and original’ broad approach. Published as the country slides into recession, it looks beyond apparent immediate causes for fluctuations of fortune to deeper, long-term forces.

Taking a global perspective on one of the largest areas in terms of population and economy in the developing world, Pamuk investigates Turkey’s economic history through four periods: the open economy during the nineteenth-century Ottoman era, the transition from empire to nation-state that spanned the two world wars and the Great Depression, the continued protectionism and import-substituting industrialisation after World War II, and the neoliberal policies and the opening of the economy after 1980. Making use of indices of GDP per capita, trade, wages, health and education, Pamuk argues that Turkey’s long-term economic trends cannot be explained only by changing economic policies, rates of investment, productivity growth, or structural change.

” A major accomplishment, this book will be a standard reference for years to come.” Dani Rodrik, author of Straight Talk on Trade

“A must-read for anybody interested in Turkish economic history and the general institutional and economic problems of the developing world.” Daron Acemoglu, co-author of Why Nations Fail

“To say that this book is seminal would be an understatement. With its extraordinarily rich and original information, brilliant insights, sophisticated analysis, and admirably clear prose, Uneven Centuries will set the standard for studying the economic history of the non-Western world for many years to come.” Reşat Kasaba, author of A Moveable Empire

“In his groundbreaking economic history of Turkey, Şevket Pamuk analyses the causes behind two centuries of uneven economic development–conflicting institutions that as they changed could simultaneously encourage growth but also hold it back.” Philip T. Hoffman, author of Why Did Europe Conquer the World?

All to play for

Turkey has travelled into the modern world along several different routes. One of the main ones, for Turks and the rest of the world, is football, and as John McManus writes in his masterful account of the sport in Turkey, the process has sometimes been more like a collision than an encounter. Indeed, disputes between supporters have claimed lives and caused lasting bitterness.

This book gives both the general reader on Turkey and the ardent football fan a glimpse into life in the Turkish soccer world, its history, personalities, and perhaps above all its excitement. Though the book’s origins lie in an anthropology doctoral thesis, it is a very lively personal account aimed at the general reader, full of personally observed detail, conversations and autobiographical touches, and backed up by diligent investigation into the history of the clubs, the lives and doings of famous players, the various scandals and allegations which have periodically rocked Turkey – and the immense gravitational pull soccer has over the country, leading to a blurring of the lines between football and politics. McManus does not stop at this frontier, but crosses it to give eyewitness accounts of several upheavals in Turkey over the past decade which on the surface had little to do with soccer – but which supporters were drawn into nevertheless.

The interaction between soccer and other areas of life dominates this book and is well explained, making it useful to readers who are new to the country. McManus’s perspective by and large is that of Istanbul’s educated middle class and, unlike some other authors on Turkey, not unduly judgemental.He is careful not to overstep possible boundary marks on controversial topics, though I wonder if conditions for Lefter, Turkey’s star player though an Istanbul ethnic Greek, felt quite as adverse as he describes. I have never seen Lefter mentioned without affection and reverence.

The puzzle which remains, however, is why sport has such a strong hold over society and its leaders that it seems to have a degree of immunity from other forms of social discipline. In past periods of martial law, with all forms of public action strictly banned, revellers celebrating a league triumph would be allowed to drive cheering and shouting noisily from one end of Ankara to the other. And there is another dimension which McManus does not explain: the uncanny similarity between the role played in Istanbul today by the “Big Three” football clubs and their supporters, and that of the Roman circus race factions and their supporters in the fifth and sixth centuries. Is this just coincidence or is there some kind of underlying common cultural mechanism at work?

As McManus points out, Turkey still does not produce as many top-quality players as might be expected of a country of 80 million people with a demographic profile still skewed towards the young. Ethnic Turks from Germany and Western Europe make a disproportionate contribution to the sport in Turkey. The internationally famous Turkish soccer stars tend to come from this background. Until young Turks can be as well trained as their contemporaries in Western Europe, successes like Turkey’s third place in the World Cup may be infrequent flashes in the pan, despite the national passion for the sport.

Turkey’s economic growth has turned the agricultural village society of only a few generations ago into (broadly speaking) a large metropolitan industrial country. Yet it is not that exceptional. Şevket Pamuk begins his lucid and immensely useful account of the country’s economic growth over the past 200 years by warning the reader that it has been “a little above but close to developing-country and world averages”.

To help us appreciate this, Pamuk offers a completely new GDP per capita series for the country since 1820, showing a 15-fold increase. Turkey has grown less strongly than Spain and Italy but done better than Iran and Egypt, though far more slowly fast than South Korea and Japan. Per capita growth has never been above an annual 5%.

This lesson – spelt out quite frequently in the book – is accompanied by a historical review of each phase of Turkey’s economic history and the politics underlying economic policymaking. Not surprisingly, the word “crisis” creeps into the narrative several times and these sections should be studied by those new to Turkey who do not remember the upheavals of 1980 and 2001 in particular. The lesson Pamuk draws from the 1980 disaster is that vested-interest groups, living on protectionism, were to blame because governments were not strong enough to deal with them. That is perhaps the dilemma of trying to achieve economic development in a democratic country. Yet looking at Turkey in 2019, it has clearly come a long way, even if it is not as far or as stable as its politicians boast or its people hope. This book is an excellent guide to what has been achieved.