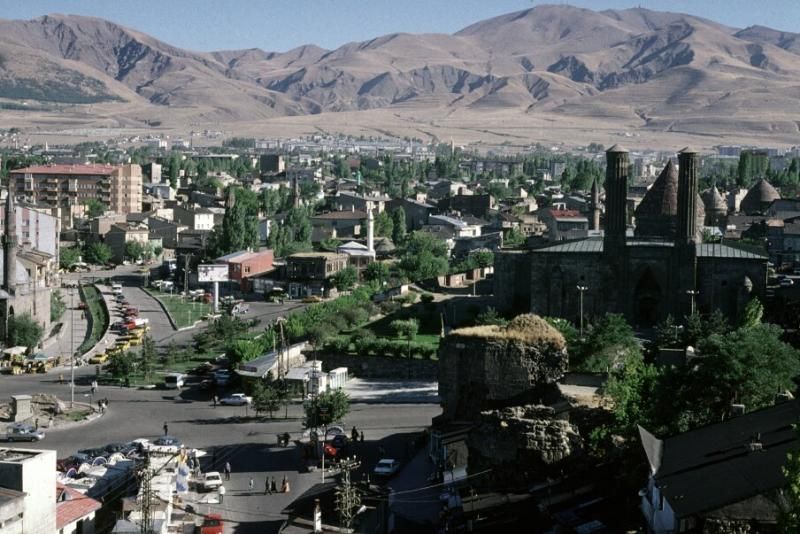 Sitting at around 2000m (6,500ft), Erzurum is a chilly city and a winter sports centre with the longest ski trail in Turkey. The ski slopes are on the encircling mountains at Palandöken and Konakli. It is also a geographically important city, controlling the route between the Caucasus and Anatolia, making it vital to every passing ruler – the Russians had it on and off for a while. In Ottoman times it was the Eastern base of the Janissaries and it played a crucial role in the War of Independence. There was a Nato base here during the Cold War and there is still a strong military presence. Atatürk University is the largest educational institution in Eastern Anatolia.

Cornucopi 55 has a special 26-page report, The Great Defender,  on the city and its historic sites, written by Scott Redford and photographed by Brian McKee.

The large fortress, Mecidiye Tabyası, overlooking the city was built under Sultan Abdulmecit in the 1850s. Few medieval buildings remain in the old town, which is centred round the Citadel, built for Emperor Theodosius. The decorated portal of the Yaku Seminary, built in 1310 for a Monghul governor, is an architectural highlight, and the two towers of the Seljuk Twin Minaret Seminary have become a symbol of the town. There are several 12th-century circular mausoleums. Urartian artefacts are among the collection in the archaeology museum.

Getting There: There is a direct rail connection to Ankara and Istanbul. Erzurum airport, shared with the military, is 10km from the city centre and has flights to Russia and Ukraine.