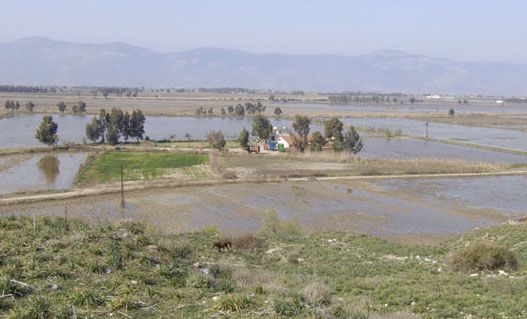 "Hüseyin Crane, whose name celebrated the great birds that once visited the delta villages in profuse numbers, recalled the days when he operated the Meander ferry between the villages of Atburgazi and Balat: when the receding waters stranded vast numbers of fish across the April flats, and the dalyans, the fish traps, had harvested prodigious quantities of eels and grey mullet, and when men came in the spring to dig in the fields for the damp liquorice…." This recollection is recorded in Meander: East to West along a Turkish River, Jeremy Seal's book about the Büyük Menderes River and the fertile alluvial deposits it had claimed since the beginning of time. This was a highway into the heart of Anatolia, conecting the Minoans and Myceneans with Hittites  and Assyrians, and many armies have passed through, from Xerxes to 20th-century Greeks.
Around the delta of the  lie the ruins of three important Ionian sites: Priene, Miletys and the Temple of Apollo at Didyma, whose oracle was renowned, while inland the river brought the classical world to Aphrodisias. The delta lands encroached on the sea, Lake Bafa was left the south.

The delta is central to the Dilek Peninsula-Büyük Menderes Delta National Park, which lies beneath Mount Mycale, with the Cave of Zeus nearby, and approached from Kuşadası. The town of Söke, 120 miles south of Izmir, lies on the north side of the delta and is a transport centre for the area.