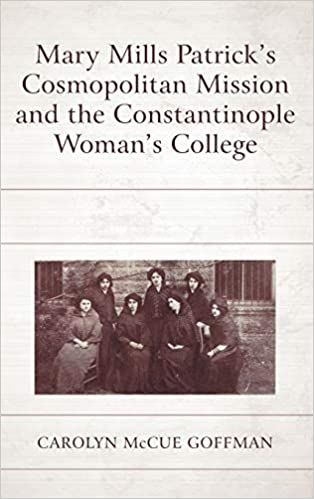 Note from Cornucopia: Under Maureen Freely’s review of this title in Cornucopia 63, the price of this title is misleadingly listed as £35. This is in fact the Kindle price. The hardback price is £81, post-free to subscribers, as shown above. We apologise for any inconvenience.

Mary Mills Patrick’s Constantinople Woman’s College was one of the most influential institutions of higher learning for women in the Middle East in the last decades of the Ottoman Empire. Patrick arrived in the 1870s to evangelise, but she gradually distanced herself from Christian proselytism in order to create a “cosmopolitan” college for all Ottoman women. Patrick was president of the Constantinople Woman’s College for 34 years, protecting the institution through the Balkan Wars, World War One, the British occupation of Constantinople, the demise of the Ottoman Empire, and the founding of the Turkish Republic. Just as the late Ottoman Empire underwent extraordinary changes, so did Patrick transform herself and the Constantinople College to meet the demands of a twentieth-century Muslim state, ultimately sacrificing her “cosmopolitan,” heterogeneous student body to an ethnically homogeneous one that reflected the newly racialised nationalism of the Turkish Republic.

Mary Mills Patrick’s Cosmopolitan Mission and the Constantinople Woman’s College explores Patrick’s career from the 1870s to the 1930s, tracking her personal religious struggle and her professional transformation from Protestant evangelist, to feminist educator, to advocate for Muslim women, to, finally, supporter of Turkish nationalism.

When Mary Mills Patrick left Iowa for Turkey in 1871, aged just 21, she was an ardent and naïve evangelist. But after four years of trying and mostly failing to turn the “primitive” Christians of Erzurum into Protestants, her faith in the project had worn thin. She had come to despair of her fellow missionaries, who taught women to read purely to give them access to the Bible. Patrick, on the other hand, believed that the younger amongst them deserved an education as good – and as Protestant – as anything on offer in America.

This was the hankering that drew her to the Constantinople Home School in 1875. At the time most of its students were Armenians from the city’s elite. In the early years of her tenure, most of the rest were Bulgarian, Assyrian or Greek. But from the outset Patrick’s most fervent wish was to welcome “Mohammedan girls” into her fold. In this she succeeded. Her first recruits were pashas’ daughters (Halide Edib among them) but after 1908, numbers grew fast. Whatever her religion or nationality, no student was left unmarked by the school’s boldly feminist, unashamedly cosmopolitan ethos. Having learned in class to work together for the common good, Patrick’s multi-ethnic graduates were to go forth to serve their empire in the same spirit, for the benefit of all.

All this took money. The money was in America, and it was never not a hard sell. But Patrick more than rose to the challenge. Once the mission boards in Boston had made it clear that they had no interest in educating women beyond what they might need to be pious wives and mothers, she applied for a charter, and once it been granted by the Massachusetts legislature, the American College for Girls in Constantinople was able to set up its own board. On hearing that her potential funders had no interest in educating the Ottoman Empire’s Muslim girls, only its Christian ones, Patrick sharpened her rhetorical tools, appearing first to confirm her audiences’ worst prejudices, then turning them on their heads.

She never got the support to which she considered herself entitled, but instead of giving up, she set her sights steadily higher. A catastrophic fire in 1905 served only to increase her ambitions for her rapidly expanding school, now widely celebrated as the third American college for women (after Elmira and Vassar in New York State) and the first women’s college in the Near East. It had only just moved to its splendid new campus on the hills above Arnavutköy when war broke out in 1914. But even after she and her staff became enemy aliens with the entry of the US into the war two years later, the school remained in session – thanks, in part, to Patrick’s long relations of trust with pashas of consequence.

These fell away after the armistice, when the cosmopolitan ethos was also put severely to the test. For of course there were tensions between pupils of different religions and nationalities. But the school’s philosophy remained the same. Throughout the War of Independence, and again in the earliest days of the Republic, Patrick made best use of her close friendship with Halide Edib, using her example to bring her message up to date. Her graduates no longer went forth to serve a crumbling empire, but to inspire a new republic.

After four years spent fending off British, French, Soviet, and Greek armies the length and breadth of Anatolia, the Republic’s founders of that were necessarily wary of foreign schools. It would have been to bolster her college’s future chances that Patrick wrote not one but two memoirs that are as remarkable for their omissions as for the stories they include. In the first, (Under Five Sultans, published in 1929, five years after leaving Turkey) she steps lightly over her missionary years to write at length on her college as a beacon of cosmopolitanism. In the second (A Bosporus Adventure, published in 1934) she recasts her story to imply that her vision of female education is not cosmopolitan but fully in line with Turkey’s new republican identity.

Caroline Goffman is a scholar of rhetoric: in her fine and fascinating study she measures Patrick’s polished, measured public writings against her private correspondence, in which she expresses much frustration and anger. Nowhere in the archives is there an account that brings the two sides of her written record together. Goffman can only speculate at what Patrick made of her legacy after retiring to Palo Alto, California. She is careful not to overstep. Her job, as she sees it, is to have thrown open the door.

She is hoping that a Turkish scholar might wish to pick up where she’s left off, to map Patrick’s legacy through her school’s many generations of students. I hope so, too, as I belong to one of them. And it was only while reading this book that I discovered where my boldly feminist, unashamedly cosmopolitan ethos comes from, and how it has fuelled my most impossible dreams, and why the time may have come to question it, even though I know I’ll never give it up.