Store > Books > The First Capital of the Ottoman Empire 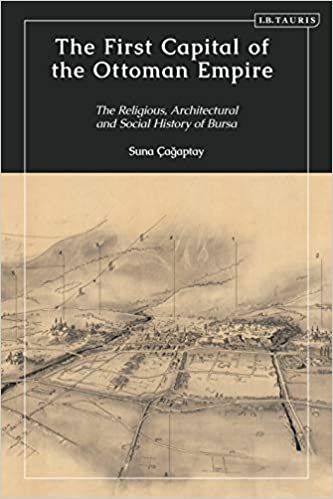 The First Capital of the Ottoman Empire

The Religious, Architectural and Social History of Bursa

From 1326 to 1402, Bursa, known to the Byzantines as Prousa, served as the first capital of the Ottoman Empire. It retained its spiritual and commercial importance even after Edirne (Adrianople) in Thrace, and later Constantinople (Istanbul), functioned as Ottoman capitals. Yet, to date, no comprehensive study has been published on the city’s role as the inaugural centre of a great empire. In works by art and architectural historians, the city has often been portrayed as having a small or insignificant pre-Ottoman past, as if the Ottomans created the city from scratch. This couldn’t be farther from the truth. In this book, rooted in the author’s archaeological experience, Suna Çağaptay tells the story of the transition from a Byzantine Christian city to an Islamic Ottoman one, positing that Bursa was a multi-faith capital where we can see the religious plurality and modernity of the Ottoman world. The encounter between local and incoming forms, as this book shows, created a synthesis filled with nuance, texture, and meaning. Indeed, when one looks more closely and recognises that the contributions of the past do not threaten the authenticity of the present, a richer and more accurate narrative of the city and its Ottoman accommodation emerges.

Bursa the Green, Bursa the Obscured

One of the great scientific advances in recent years has been the visualisation of black holes, with both simulations of their gravitational forces and actual photographs. The invisible has become visible, the theoretical has become substantiated. Astronomy may never be the same.

Something similar might be claimed for the study of early Ottoman history: the historian Colin Imber once termed the 14th century the “black hole” in the formation of the early Ottoman state. Written resources are virtually non-existent for the early period, and much of the interpretation is based on later narratives, coloured – or even invented – by an odd mixture of triumphalism and nostalgia. The limited written evidence has been scrutinised in recent years by Cemal Kafadar (1995) and Heath Lowry (2003), and while they have eliminated many of the lingering misconceptions, their writings also emphasise how much we simply don’t know about the critical early period of Ottoman history.

Into this scene now enters the architectural historian Suna Çağaptay. In the face of limited textual evidence she turns instead to material culture to write a history complementary to those of Kafadar and Lowry. Her study focuses on the architecture, urbanism and landscapes of Bursa, the first Ottoman capital, to fill Imber’s black hole. While attempting to situate the city broadly in its historical context, her emphasis is on the period from 1326 – marking the Ottoman conquest of the Byzantine city of Prousa – to 1402, when the Ottoman capital was sacked by the Mongol Tamerlane.

Now a bustling, industrial metropolis, present-day Bursa still reflects something of its picturesque historical setting, nestled against the slopes of Uludağ (Mount Olympus), rising above the fruitful Bithynian plain. The verdant setting, watered by abundant hot and cold springs, gave rise to the name Yeşil Bursa, or “Bursa the Green”, as well as to the travellers’ impression that “Bursa consists of water” (the words of the 17th-century Ottoman courtier Evliya Çelebi). But the seemingly idyllic setting also negatively impacted the history of the city, which was plagued by seismic activity, most notably the tragic destruction of much of the historic fabric in the 1855 earthquake, after which Bursa was remodelled and rebuilt following French urban planning concepts. Thus, Çağaptay ends her study with a new nickname – “Invisible Bursa,” as so much of the historical fabric has vanished or has been irretrievably altered.

Nevertheless, the book succeeds in making the invisible visible, reclaiming the historic city through the use of travelogues, early travellers’ illustrations and photographs, combined with the careful examination of standing (and occasionally buried) remains. Buildings, she argues, properly analysed, often can tell us what texts do not. Throughout, she emphasises the transitional nature of the early Ottoman city, which preserved much of its Byzantine predecessor. Indeed, the early Ottomans went so far as to use two standing Byzantine religious monuments – alas, destroyed in 1855 – as the tombs of the dynastic founders, Osman and Orhan. Rather than suppress its pre-Ottoman past, the conquerors seemed to revel in it. The city’s population was multi-ethnic and heterogeneous; so, too, was its architecture, an admixture of existing Byzantine structures, new buildings that repeated Byzantine construction techniques and decorative details, and those that feature imported practices and forms – from sources as varied as the Seljuks, the Mamluks and the Italians. New building types and techniques appear, yet older ones are kept. Accommodation is the watchword.

As Bursa expanded in this period, new nodes appeared, repeating forms of the citadel in miniature to consolidate the surrounding landscape into the Ottoman centre. New centres were formed, near the hot springs at Çekirge to the west, under Murad I, and on a promontory to the east under Bayezid I, with mosques surrounded by social and religious amenities. These planned neighbourhoods, called either külliye or mahalle, mark a distinctive and original feature in Ottoman urban planning, and set a precedent for Constantinople’s transformation from a Byzantine into an Ottoman city.

Years ago, when I was speaking about the architectural transition in Bithynia, a respected Byzantine historian asked me: “When exactly did Ottoman architecture become truly Ottoman?” I was taken aback. He was no doubt thinking of the standardisation that had taken place by the time of Sinan. But as Çağaptay amply demonstrates in her lucid study, Ottoman architecture is Ottoman from the very start – a visual reflection of the ethnic and religious diversity that characterised the early population. In short, a careful analysis of the standing architecture of the 14th century can tell us as much (or perhaps more) about the nature of the early Ottoman state as any text.