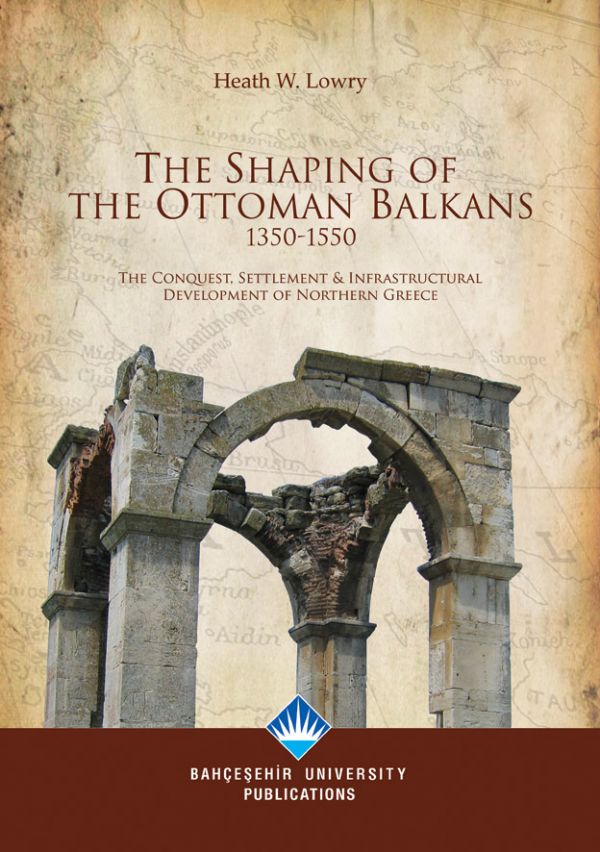 The Conquest, Settlement and Infrastructural Development of Northern Greece

Copies of this title are also available in Turkish. Please contact ofis@cornucopia.net to order.

Just as I was completing my consideration of Heath Lowry’s latest work, there arrived on my desk an even more recent study that proved to be the remarkable coda to an already revisionist account of the first Ottoman centuries in northern Greece. Lowry is a prolific author on the nascent Ottoman era, and a notable contributor to this magazine. His aim is nothing less than the rewriting of early Ottoman history, a topic he addressed in The Nature of the Early Ottoman State, reviewed in Cornucopia 29.

Lowry’s contention is that our understanding of the formative years of the Ottoman Empire – of the time before it was an empire – is based on sources that distort the facts. These sources, he writes, are less a reflection of what had been than of how later writers chose to present the past.

The hero of Lowry’s story is the ucbey (march lord) Haci Gazi Evrenos Bey, who died in 1417 and was associated with almost every conquest between the Meric River in the east and the Adriatic in the west. Although Evrenos’s name has not been erased from history, the part played by him and his family in establishing Ottoman rule in western Thrace and Macedonia, and maintaining it down the centuries, was egregiously downplayed by later chroniclers. Once the rule of the descendants of Osman was firmly established, and his dynasty had captured the coveted Byzantine capital and made it their own, no other family except the Ottoman was much praised in the annals of the empire, or lauded so extravagantly for its part in the making of this new world.

Evrenos was the most prominent of the march lords in the Balkans in the second half of the 14th century, and the now mostly ruined buildings marking their westerly progress provide the evidence that he and his family, the Evrenosogullari, were responsible for pushing back the Ottoman frontier. They settled first in Gumulcine (modern Komotini), then in Siroz (Serres) and finally in Yenice Vardar (Giannitsa). Evrenos endowed these cities, and other sites along his route, with mosques and the infrastructure of urban and commercial life. In Yenice Vardar, for instance, he built an inn, a seminary, a small mosque, a soup kitchen, a Friday mosque, a double bathhouse and an aqueduct. Identifying these has taken Lowry on an extraordinary journey into territory that is familiar, yet hitherto so little understood that he can propose we forget most of what we thought we knew about the first Ottoman conquests.

As well as searching on the ground for architectural remains of the conquerors of Thrace and Macedonia, Lowry has scoured the region’s 15th-century archives, where the properties endowed by Evrenos and his ilk are recorded. One later historian in whom he places his trust is Evliya Celebi, who recorded his visit to the region in 1668 in his Book of Travels. Though beholden to the Ottoman court like most other contemporary writers, Evliya was not prepared to suppress information. Lowry is fortunate in having located calligraphic inscriptions, some considered lost, and photographs taken before Evrenos’s buildings were destroyed. Most of the rest of the many photographs in these books are his own.

Lowry’s findings lead him to the view that the Osmanogullari – the Ottomans – were no more than first among equals at this time. He also rejects the view that their westward push was merely a series of raids for slaves and booty, arguing that they had planned a campaign of conquest from the outset, as the permanence of the monuments they built eloquently testifies.

It has long been known that the warriors in the vanguard of the Balkan conquests were accompanied by great numbers of dervishes, who were among the earliest settlers in the new territories. The conquerors built soup kitchens and convents for their welfare; Lowry’s research reveals that there were 65 soup kitchens in northern and central Greece between 1350 and 1750, and 267 convents of various dervish groups, among which Bektashi and Halveti seem to have predominated.

Lowry takes as case studies a host of topics: the fortifications of Selanik (Saloniki), previously considered Byzantine but here shown to be Ottoman; urban life in Siroz according to the evidence of the surviving monuments and the city’s 1455–1478 tax registers; the eastern Macedonian town of Zihne, abandoned at the end of the 19th century, now an overgrown field of architectural remains; the creation by Suleyman I’s grand vizier Ibrahim Pasha of the north Aegean coastal town of Kavala; and the hot springs of northern Greece and the bathhouses built to harness their waters.

The writing of Lowry’s weighty tome was well advanced when he was contacted by the present-day descendants of the mighty Evrenos Bey, in whose possession is a family tree drawn up around 1680 and a number of old family photographs. The first of these reveals that Evrenos had seven sons and at least two daughters, and names their descendants. Six of these children were borne by two Christian concubines, and the two daughters mentioned were given to other march lords, presumably as a gesture of class solidarity. The family tree also details exactly where in the dynastic burial ground in Yenice Vardar Evrenos and his immediate descendants are buried. Lowry was able to locate some of their tombs. Evrenos’s own mausoleum was rebuilt in 1885–86, and is depicted in a late-19th-century photograph showing it crowded with the stones of his later kin. It was again reconstructed in 1908–10, just before many of the family left their ancestral home on the arrival of the Greek army in 1912. Those who remained were “exchanged” for Greeks of Anatolia in 1923–24.

In 2006 excavators removed Evrenos’s bones during the course of renovation work in his mausoleum, and their return to his resting place is awaited. Members of his family are fêted in Giannitsa, and the role of their mighty forebear and his descendants in creating and beautifying the city over the centuries is at last acknowledged in a place where the Ottoman past was previously denied.